U.S. Senator Tammy Baldwin Statement After Commerce Committee Hearing on Nomination of Elaine Chao for Secretary of the Department of Transportation

"I am very pleased that Ms. Chao stated her commitment and the Trump Administration’s commitment to strong ‘Buy America’ standards. " 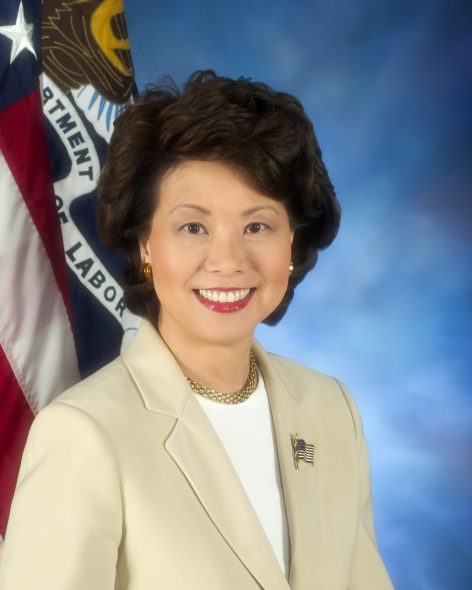 Elaine Chao. Photo from the U.S. federal government. Photo is in the Public Domain.

“Given Ms. Chao’s previous opposition to ‘Buy America’ requirements, I have had serious concerns about her commitment to a top priority of mine. I have fought hard to advance ‘Buy America’ provisions because I strongly believe American workers should build our infrastructure with American products, and taxpayers’ money should not be spent on Chinese iron and steel.

“Today, Ms. Chao made a commitment to support ‘Buy America’ provisions and work to keep President-elect Donald Trump’s promise to ‘Buy American and hire American.’ Unfortunately, Congressional Republicans have not shared this commitment. Just last month, House Republicans removed my ‘Buy America’ standard from bipartisan water infrastructure legislation and President-elect Trump has been silent. I am very pleased that Ms. Chao stated her commitment and the Trump Administration’s commitment to strong ‘Buy America’ standards. For this reason, I will support her nomination for Secretary of the Department of Transportation and I will hold the incoming administration accountable to keep their word to American workers and manufacturers, in Wisconsin and across our country.”

U.S. Senators Tammy Baldwin and Marco Rubio Introduce Bipartisan Infrastructure Legislation to Make Sure it is Built to Last