WASHINGTON, D.C. – Two years since the Supreme Court gutted core protections in the Voting Rights Act in Shelby County v. Holder, states and localities throughout the country have passed sweeping laws that disproportionately suppress the voting rights of minorities. These laws have left voters without the protections they need to exercise their constitutional right to vote. To restore and advance the voting protections for all Americans, U.S. Senator Tammy Baldwin has joined a group of Senate and House Democratic lawmakers, led by Senator Patrick Leahy (D-Vt.) and Congressman John Lewis (D-Ga.), to introduce the Voting Rights Advancement Act (VRAA) of 2015.

“For nearly 50 years, the Voting Rights Act helped secure the right to vote for millions of citizens.   I was deeply troubled by the 2013 Supreme Court decision to gut a fundamental provision of the law that protected Americans against voting discrimination and helped ensure a fair and equal voting process. Since that decision, we have seen how the clocks have been turned back on the most fundamental of our American rights and how there is a real threat to voter participation among Americans who have experienced discrimination when voting. I am proud to join with my colleagues in the Senate and House to make this right by working together to end voting discrimination and guarantee that all Americans have equal access to the polls,” said Senator Baldwin.

“The Voting Rights Advancement Act is a voting rights bill for all Americans.  It is a bill for the next generation, and helps protect the legacy of the previous generation who fought so hard five decades ago for these voting rights protections,” said Senator Leahy.

“If it was not clear in 2014, I think it is clear today that we have come a great distance in this country toward healing the divisions and problems among us, but we are not there yet.  This legislation acknowledges that we still have much more work to do, but we have come too far, and we have made too much progress to stop now.  I support this legislation and hope that this Congress will do what is right by the people of this nation and pass the voting right legislation that restores justice, dignity, and equal access to the ballot box in America,” said Congressman Lewis.

Protections under the Voting Rights Advancement Act of 2015 will extend to all voters nationwide.  The legislation targets certain voting practices known to suppress the voting rights of minorities.  The bill is the result of collaboration with those at the grassroots who have witnessed the harmful effects that discriminatory voting laws have had in their communities.

Key provisions of the bill include: 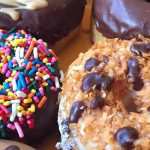 Business: The Story of Donut Squad by RT Both
Black Organizing Group Tripling in Size by Sam Woods