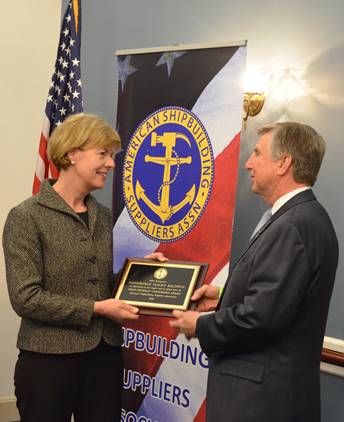 WASHINGTON, D.C. – For her efforts to support and maintain a robust shipbuilding supplier industrial base, U.S. Senator Tammy Baldwin was recognized by the American Shipbuilding Suppliers Association (ASSA) as the 2018 recipient of the Honorable Thad Cochran Leadership Award.

“I take great pride in representing Wisconsin’s shipbuilding industry because our workers have helped sustain America’s security for generations, boasting a successful history of building ships for our nation’s defense,” said Senator Baldwin. “I value my partnership with the American Shipbuilding Suppliers Association in supporting our shipbuilding and manufacturing industries that strengthen the economic security of the middle class. Thank you for this honor and I look forward to many more years of working with the ASSA and supporting Made in Wisconsin shipbuilding.”

Senator Baldwin was selected to receive this award for her strong commitment to investing in science, research and technology to strengthen advanced manufacturing, small business start-ups and an innovative economy that is built to last and ready to compete with the rest of the world. In addition, the award recognizes Senator Baldwin’s successful inclusion of Buy American provisions in recent defense authorization and appropriations bills, which has helped to secure a level playing field for U.S. shipbuilding suppliers, maintaining the health of the domestic industrial base.

“We are proud to honor Senator Baldwin as our 2018 Honorable Thad Cochran Leadership Award recipient,” said Stephen Cobb, Chairman of the Board of Directors of ASSA. “She has been a staunch advocate for strengthening our manufacturing economy for American companies to grow and create jobs and has been an impactful leader in supporting workforce readiness programs. I cannot think of a better person to honor.”

Senator Baldwin has been a steadfast advocate for Wisconsin’s shipbuilding and manufacturing industries, including announcing new legislation, the Made in America Shipbuilding Act, that strengthens Buy American requirements for the federal government’s purchase of ships by expanding current law to cover all federal agencies, all classes of ships and substantially more shipboard components, including items made in Wisconsin.

The ASSA established this annual award as a way to honor the leadership of Senator Thad Cochran (R-MS) for his continued and unwavering support to those large and small businesses that provide the critical technologies and components necessary to build Navy and Coast Guard ships, which are critical to U.S. national security.