MADISON, Wis. — Failed Republican presidential candidate and current Wisconsin Gov. Scott Walker has refused to condemn documented plagiarism by the Donald Trump campaign, which is the exact opposite of Walker’s thunderous condemnations in 2014 over allegations of plagiarism by his Democratic opponent.

“The rules on plagiarism Scott Walker had for his Democratic opponent don’t seem apply to his Republican ally Donald Trump,” said Scot Ross, One Wisconsin Now Executive Director. “I do think the legitimate question goes to the heart to the authenticity of the candidate.***”

In September 2014, it was revealed select passages from candidate Burke’s jobs plan were similar to passages from other campaigns. Walker, who touted his “brown bag” tour based on a similar campaign run years earlier in Ohio, had this to say in the days following, including running television ads attacking Burke for plagiarism:

“Yeah, I think that the problem for her is this isn’t just some campaign flier…This was the centerpiece of her campaign,” Walker said. [Milwaukee Journal Sentinel, 9/25/2014]

“I just think it’s disappointing that their campaign that puts so much emphasis and made such a big deal about how this was based on her own personal record, and her time at Harvard Business School…ends up in the end now looks like, at least a good chunk of it came from a political hack taking it from other states,” said Governor Walker. [WISN-TV, 9/20/2014]

“I think the people of the state deserve better particularly when we have heard from their campaign making a big deal this came out of experience at Harvard Business School and talking about that,” said Walker. [WISC-TV, 9/19/2014] 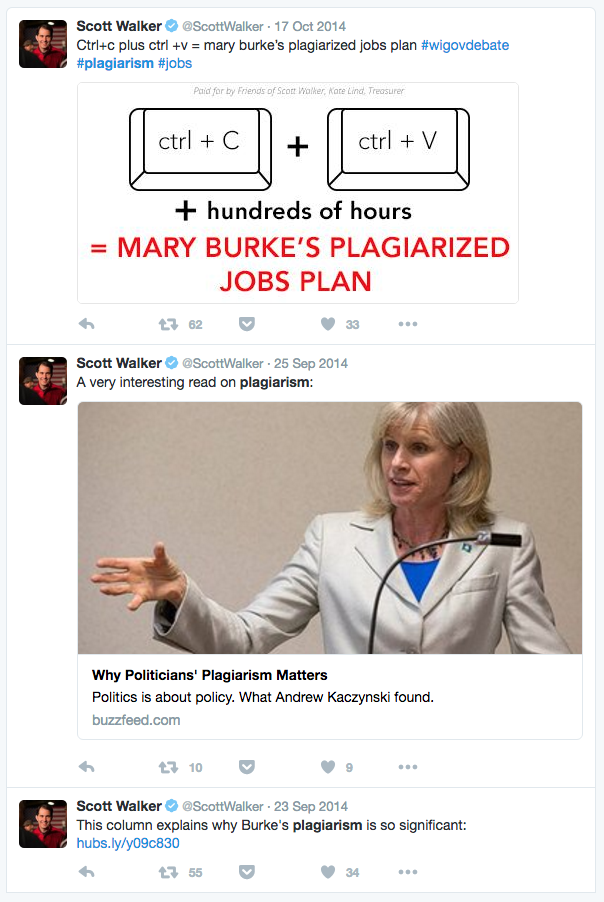 One thought on “#Thanks, Obama!”