Join us on Saturday, Sept. 2 at Humboldt Park for a fantastic day of music

WMSE has teamed up with Honey Pie and Palomino to bring you this summer’s most delicious treats—the Tonkatsu Twin Brother and the Roast Beast of the Damned. A portion of the sales from these yummy sandwiches goes to support WMSE’s 8th Annual Backyard BBQ. These special-edition sandwiches are available now through Sept.2.

WMSE took the liberty of naming these sandwiches after two of our favorite local bands who will be playing our backyard BBQ – Twin Brother and Whiskey of the Damned.

Join us on Saturday, Sept. 2 at Humboldt Park for a fantastic day of music – headlining the event is the legendary Alejandro Escovedo. Diego’s Umbrella – who are making their Midwest debut – Twin Brother, Whiskey of The Damned and The Koch-Marshall Trio open the day. 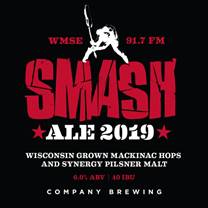