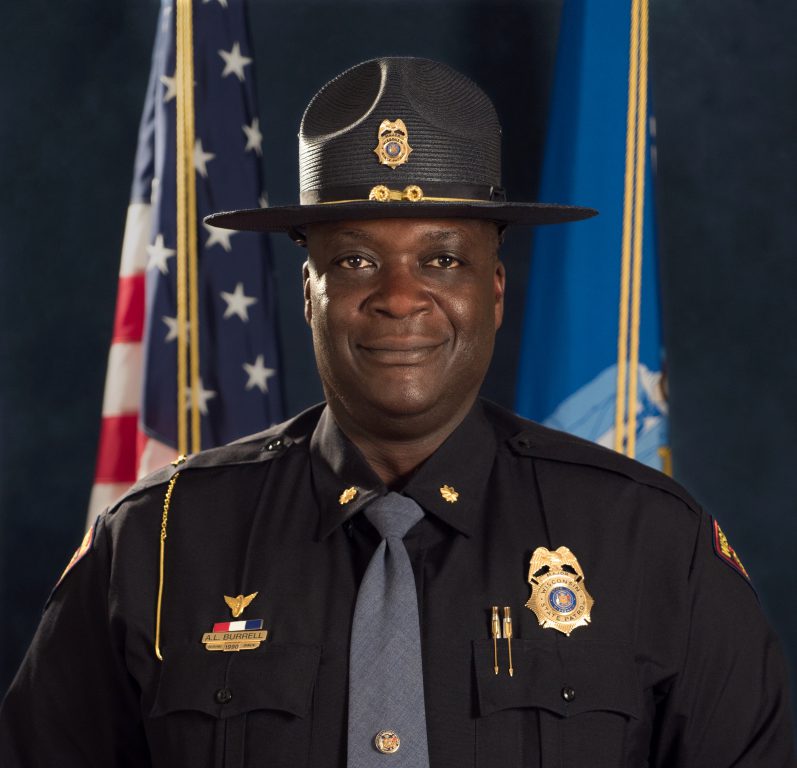 Anthony Burrell. Photo from the State of Wisconsin.

Adin Palau, Chair of the State Council on Affirmative Action said council members were inspired by Burrell’s dedication and accomplishments. “Along with 30 years of distinguished law enforcement service, this award recognizes Superintendent Burrell’s ongoing efforts to encourage diversity within the Wisconsin State Patrol, leadership role as past president of the National Black State Trooper’s Coalition, and commitment to building stronger relationships with minority communities in the Milwaukee area,” Palau said.

Governor Tony Evers appointed Burrell as Superintendent of the Wisconsin State Patrol in January 2019. He is Wisconsin’s first African-American appointed to the position. Burrell was awarded the Medal of Valor – the State Patrol’s highest decoration for bravery – following the tragic shooting death of Trooper Trevor Casper by an armed suspect in March of 2015.

“Superintendent Burrell is a respected advocate for the law enforcement community who works diligently to encourage women and men, from all backgrounds, to consider career opportunities in the State Patrol,” Wisconsin Department of Transportation Secretary-designee Craig Thompson said.

The ACE program is administered through a partnership with the Milwaukee Mitchell International Airport, Milwaukee Public Schools and airport employer/mentors. The program supports the aviation industry in its efforts to diversify and fill a wide range of available positions. Careers explored in the program include working with airlines, airport operations, the Federal Aviation Administration, the Air National Guard, civil and aerospace engineering, as well as opportunities with state and federal government.

“The true success of the ACE program is the support it provides minority students preparing for their future careers,” Thompson said.

ACE interns consistently receive outstanding reviews from their employers; many are offered jobs during the school year and after graduation.

In the last three years, all students involved in the program have graduated from high school, and most of these students have gone on to pursue post-secondary education.