The first of 16 Assembly GOP wins is being released today. 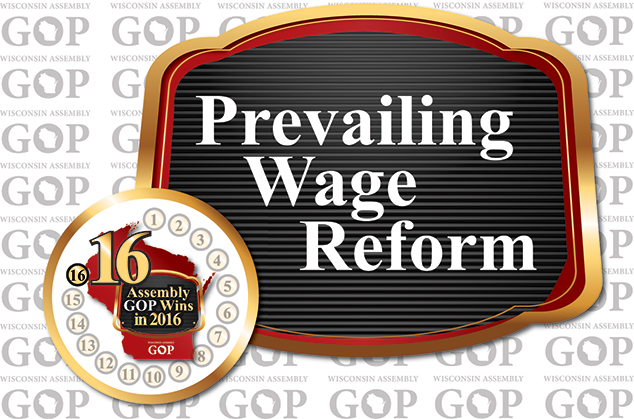 Madison…Assembly Speaker Robin Vos (R-Rochester) is ending the year with a countdown of the top 16 accomplishments for Assembly Republicans in the 2015-2016 legislative session.

“Assembly Republicans have had many conservative victories that have helped make Wisconsin an even better state,” said Speaker Vos. “Our economy continues to improve because of our pro-growth agenda and we’re addressing problems facing families across the state.”

The first of 16 Assembly GOP wins is being released today. The implementation of prevailing wage is the first accomplishment highlighted. This reform that eliminates a set wage for local government construction projects officially goes into place on January 1, 2017.

“As one of the leaders who helped shepherd through the reform, more taxpayer dollars can be saved by eliminating the prevailing wage in state projects,” said Speaker Vos. “A full prevailing wage repeal should be considered as part of a comprehensive transportation funding package.”

The current Assembly Republican majority has 63 members, the largest since 1957.  When the 2017-2018 legislative session begins on January 3, the historic majority will increase to 64 members.

“I’m proud of our conservative record of success this year,” said Speaker Vos.  “We will continue to build on that record in the coming year by focusing on finding long-term solutions to issues in our state.”