Congressman Sensenbrenner delivered the following remarks on the House floor: 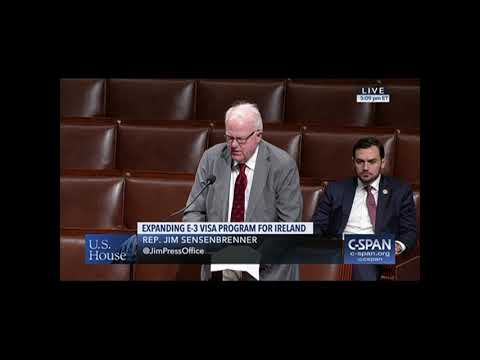 “The United States was built on hard work and the determination of immigrants -many of them who hail from Ireland.  Through their perseverance, they have enabled this country to grow and prosper.

I believe in the value and opportunity that comes with legal immigration. I am pleased to have authored this legislation to make the process more efficient for one of our oldest allies, and add to the great legacy of cultural diversity celebrated our country.

This modest proposal would give Irish Nationals the opportunity to work in the U.S. under the non-immigrant visa category of the E-3 Visa, previously reserved only for Australian nationals. Ireland in the meantime, has proposed a reciprocal work visa specific to U.S. nationals so that those wanting to live and work in Ireland can more easily do so.

The E-3 visa is one of the most efficient U.S. visa options.  Applicants outside the United States may apply directly at a U.S. consulate, thus avoiding lengthy processing times with U.S. Citizenship and Immigration Services. The visas are granted for 2 year periods (renewable indefinitely), and the spouses of E-3 visa holders are permitted to apply for employment authorization documents.

Currently, 10,500 E-3 visas are allocated each year, yet only half of these are used.  This legislation would allow Irish nationals to apply for those visas unused by Australian nationals.

This significant addition to the U.S. immigration system will not only benefit Irish nationals seeking employment in the United States, but also ease restrictions on Americans wanting to live or retire in Ireland.

In conclusion, I would like to say that this does not increase the number of visas that are authorized in total. It merely allows the Irish nationals to apply for the visas that Australian nationals do not want to use on a year-to-year basis.

I urge my colleagues to support the legislation and yield back the balance of my time.”