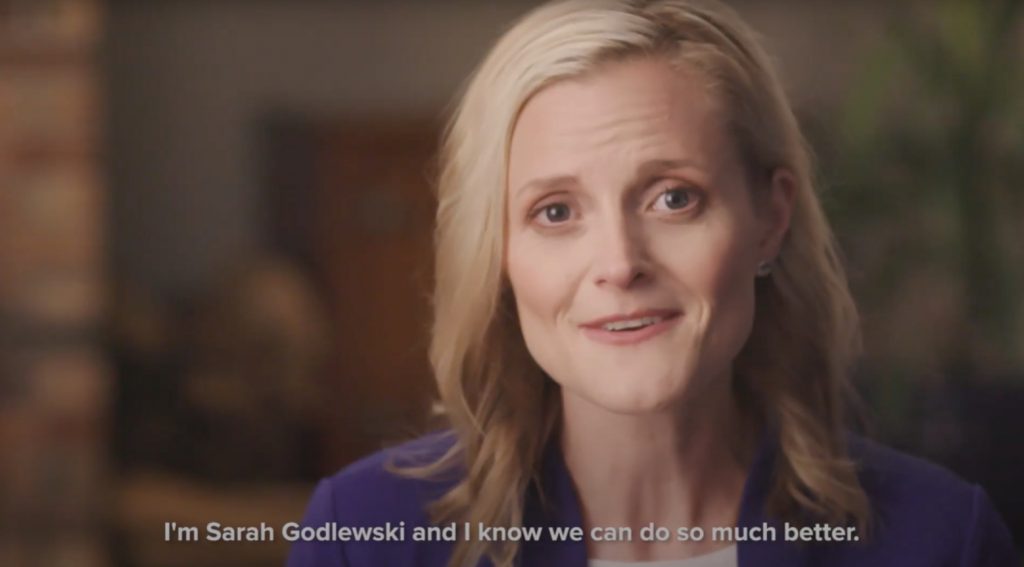 Sarah’s launch video illustrates the side-by-side comparison between Ron Johnson – a chronic conspiracy theorist who’s lost touch with reality and turned his back on those struggling economically – with her own story as the daughter of two public school teachers who understands what working Wisconsinites are going through, and is laser-focused on their success.

“I’m running for Senate because Wisconsinites deserve a senator who’s laser-focused on getting things done on the kitchen table issues facing working families,” said small businesswoman and State Treasurer Sarah Godlewski. “Ron Johnson has completely lost touch with Wisconsin and reality, spreading conspiracy theories, denying climate change, and obstructing economic relief. It’s time to take a different path in Washington. As a mom, a former small business owner, and Wisconsin’s fiscal watchdog, I’m not going to let anything get in the way of Wisconsin’s success.”

From helping women launch successful small businesses to delivering COVID relief for kids, Sarah’s spent her career focused on solutions, no matter the obstacles in her way. In the Senate, she’ll break through the gridlock that Ron Johnson helped erect, in order to get things done on kitchen table issues like child care, prescription drug costs, racial equity, climate change, and good-paying jobs all across Wisconsin.

Sarah’s taken on big, tough fights before, and won. She led the campaign to stop Scott Walker and politicians from getting rid of the State Treasurer’s office, ran a winning grassroots campaign across the state to get elected as Wisconsin’s fiscal watchdog, and then, as Treasurer, put taxpayer dollars back into schools, renewable energy projects, and small businesses.

Demonstrating her commitment to running a grassroots-powered campaign, Sarah isn’t taking a single dollar in contributions from corporate PACs – just like she did in her 2018 campaign for State Treasurer.

Beginning next week, Sarah will criss-cross Wisconsin holding launch events across the state to discuss the kitchen table issues facing Wisconsinites and build a 72-county campaign to win.

State Treasurer Sarah Godlewski and 16 State Treasurers from Maine to California say federal paid family & medical leave is critical to rebuilding the economy post-COVID, responding to a “chronic care crisis that has been simmering for generations.”