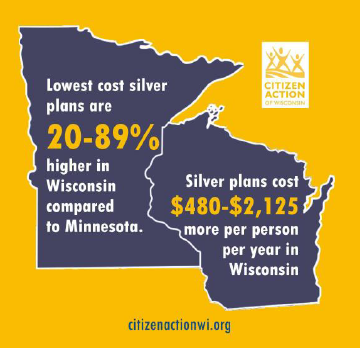 The full report can be downloaded here.

The report also shows that the U.S. Supreme Court Case of  King v. Burwell Court could make the rate disparity between Wisconsin and Minnesota much worse.

The case of King v. Burwell could strip health insurance subsidies in states like Wisconsin which did not set up their own Affordable Care Act marketplaces. This could increase premiums on average over 300%. If Wisconsin were to create its own health insurance marketplace, there would be no threat to health coverage.

“The fact that Minnesota is doing so much better than Wisconsin in controlling health insurance costs should be a wakeup call to state leaders in Madison,” said Robert Kraig, Executive Director of Citizen Action of Wisconsin. “This report documents that states like Wisconsin that refuse to use the tools made available by national health care reform are undermining the fundamental freedom of their own residents to access quality affordable health coverage.”

“The decisions that are made here at the State Capitol have big impacts the cost of healthcare for our citizens”, said State Representative Melissa Sargent. “This high cost hurts our families, our businesses and our state. Families will have less spending money and businesses have less money to give raises.”

“A very significant factor in the cost of health insurance is the rejection of federal funds for BadgerCare, said Jon Peacock, Research Director for the Wisconsin Council on Children and Families. “The high cost of coverage for those denied BadgerCare will mean only those that know they need the insurance will scrape together the money to purchase coverage. As a result, adverse selection in the market and leads to higher rates for everyone.”

The report finds that state policy has a quantifiable impact on the premium disparities between Minnesota and Wisconsin. To see all the public policy drivers documented in the report click here.