"The mass incarceration of African American men who have been disproportionately charged and imprisoned for low-level marijuana offenses is something that must be urgently addressed."

“Wisconsin has among the worst racial disparities in the country. The mass incarceration of African American men who have been disproportionately charged and imprisoned for low-level marijuana offenses is something that must be urgently addressed,” Rep. Stubbs stated. “We need to rethink and modernize our marijuana laws in Wisconsin. Far too many children are being raised without both parents present due to possession of a small amount of marijuana. And when one community is so disproportionately impacted by these policies, it is beyond time to pursue real solutions. Simply put, we need action – not another study or report. With limited law enforcement resources, it just makes sense to focus our efforts on serious crimes which will make our communities safer.”

In Wisconsin, African Americans are arrested for marijuana possession at four times the rate of white residents despite similar rates of usage. Most of the decriminalization states impose a civil fine, which avoids the life-altering consequences of a criminal record.

“People of color have disproportionately felt the impact of outdated policies all across our criminal justice system,” Lt. Gov. Mandela Barnes said. “Possession of small amounts of marijuana is no reason for anyone serve a prison sentence, lose out on a job, nor lose their voting rights. Marijuana decriminalization is an issue I’ve championed since I’ve been a state legislator. Today, I am proud to stand with Rep. Stubbs as she introduces this important legislation that sets us on the right path to prioritizing higher level crimes and smarter criminal justice policy.” 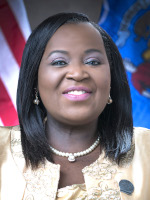