The Chicago pizza staple will kick it back to 1991 and offer opening-menu prices for dine-in only Monday, Feb. 3 through National Pizza Day on Sunday, Feb. 9, 2020 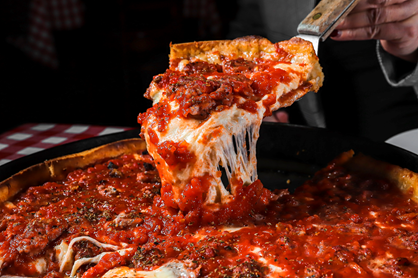 WHAT:
In honor of National Pizza Day (Sunday, February 9, 2020) Pizanos’s Pizza & Pasta (1154 N. Water St.), the award-winning deep-dish pizza joint, drops its prices to what they were when the restaurant first opened its doors in 1991.

Rudy Malnati, Jr., son of the creator of deep-dish pizza, opened Pizano’s Pizza & Pasta 29 years ago in honor of his father’s legacy, and it quickly became a Chicago staple. During the week leading up to National Pizza Day, prices on all menu items drop to what they were in 1991, including Rudy’s Special deep-dish pizza with cheese, sausage, mushroom, onion and green pepper (large $19.75/normally $36.20); Vegetarian Special thin-crust pizza with cheese, mushroom, onion and green pepper (large $17.25/normally $27.20); Cheese Deep-Dish Pizza (small $8.75/normally $16.70); Pepperoni Thin Crust Pizza (medium $11.25/normally $20.20). The National Pizza Day special runs from Monday, Feb. 3 through Sunday, Feb. 9 for dine-in only.

Pizano’s Pizza & Pasta is open daily beginning at 11 a.m. For additional information on all locations, visit pizanoschicago.com/locations or call 414.277.1777.

About Pizano’s Pizza & Pasta
Founded in 1991 by the son of a Chicago pizza legend, Pizano’s Pizza & Pasta offers award-winning deep-dish and thin-crust pizzas, handmade pastas, traditional Italian chicken dishes, salads, appetizers, and more. Available for dine-in, delivery, or pick-up, Pizano’s has five Chicagoland locations and one in Milwaukee, WI. The restaurant features food steeped in Italian tradition, skillfully prepared from high-quality ingredients, and served in an inviting atmosphere in which to celebrate friendship and family. The pizzas are also available to be shipped across the nation through Pizano’s Coast to Coast.