While UW-Madison Students Are On the Move, Sen. Ron Johnson Remains Stuck in Reverse on College Affordability

MADISON, Wis. — Allowing student loan borrowers to refinance their loans, just like you can with a mortgage, and providing financial aid for eligible students are common sense measures to make higher education affordable for Wisconsinites. With UW-Madison students on the move August 14 and 15 and student debt topping $1.3 trillion, One Wisconsin Now unveiled a mobile billboard noting U.S. Sen Ron Johnson remains opposed to college affordability efforts.

“On the critical issue of student debt and college affordability, Sen. Ron Johnson could not be worse,” said One Wisconsin Now Executive Director Scot Ross. “He opposes federal financial aid for students, voted multiple times against allowing graduates to refinance their loans just like you can a mortgage and proposed more for-profit colleges as a solution to the $1.3 trillion student loan debt crisis in America.”

Analiese Eicher, Program Director at One Wisconsin Now, noted that it seems Johnson is stuck in reverse on student debt. In past comments on the issue he cited his time at the University of Minnesota in questioning why students and their families are increasingly burdened by debt. But at the time the multi-millionaire Sen. Johnson attended college, his tuition at the public university was 1,700 percent lower than it is today.

She commented, “While students are on the move all over Madison, Ron Johnson is stuck on reverse on college affordability. Borrowers are working hard to get their education and taking on the responsibility to pay for it. It’s important for students and their families put Sen. Johnson on notice that student debt and college affordability are huge issues for them and that he ought to get on board with reforms.”

The mobile billboard sponsored by One Wisconsin Now is pictured below: 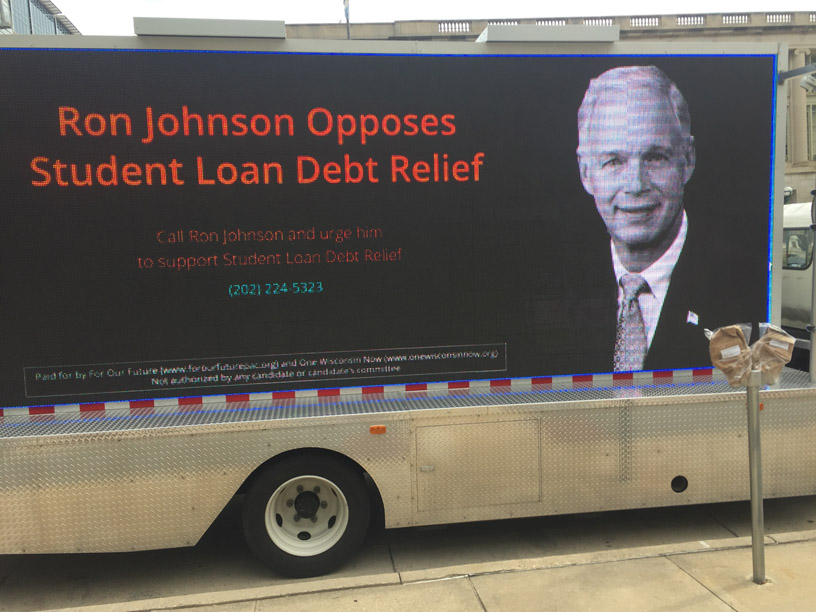 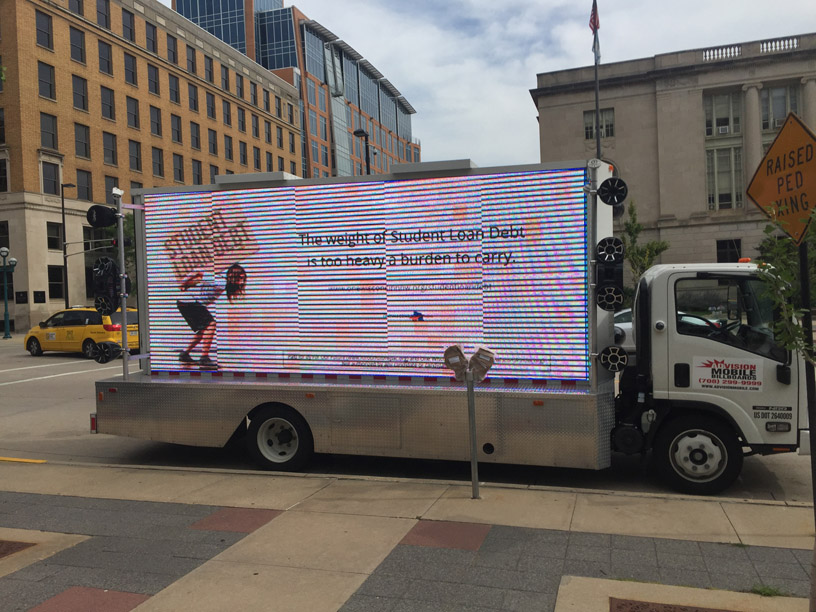 Instead of helping, as a member of the U.S. Senate Johnson has compiled an atrocious record on the the issue of college affordability. He has cast multiple votes against legislation that would have allowed borrowers to refinance their student loans, just like you can with a mortgage. Instead Johnson supported a measure that locks borrower into higher than necessary interest rates, even though the federal government loans money to big banks at rates below one percent and makes tens of billions of dollars in profits from the interest on student loans. He has also suggested that the federal government should not be providing financial aid to help help eligible students and held out more for-profit colleges, like Trump University, as a solution to the student debt crisis.

In the state of Wisconsin, now third highest in the nation for percentage of graduates with student debt, there are an estimated one million borrowers with student debt who collectively owe roughly $19 billion. According to statistics from the federal government, 515,000 Wisconsin student loan borrowers could have lowered their interest rates if they were allowed to refinance.

“While students are moving and changing their addresses, Sen. Johnson is keeping them from being able to move to a lower interest rate on their student loans,” concluded Ross. “We’re reminding people it’s a great time to call Ron Johnson and tell him to either get it in gear on this critical issue and support reform or get out of the way.”