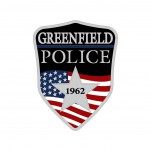 (Greenfield, WI) – At 1:36am on Sunday, August 22, 2021, a Greenfield Police Officer performed a traffic stop of a vehicle near South 35th Street and West Oklahoma Avenue. After initially stopping, the vehicle fled and crashed near South 27th Street and West Becher Street. The lone occupant of the vehicle exited and began shooting at officers. A 36 year old Greenfield Officer with 3 years of experience was hit multiple times and is in critical, but stable condition. Two other Greenfield Officers, one 32 year old with 1.5 years of experience, and the other a 22 year old with 3 years of experience, returned fire striking the suspect. The suspect, a 31 year old male from Milwaukee was pronounced deceased at the scene.

Further information will be released in the future.