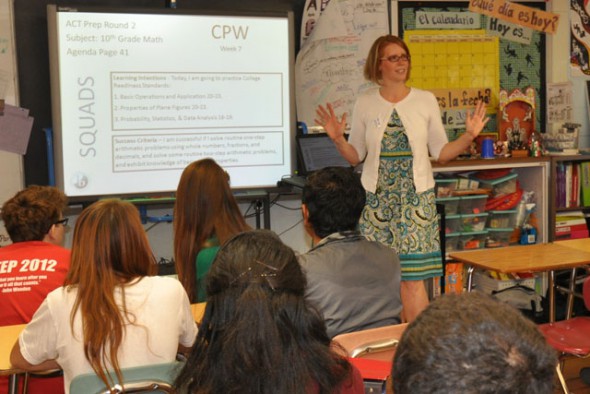 Moore in her classroom after receiving the Milken Educator Award in 2013. Photo from MPS.

LMC describes the group as an “elite network of exceptional educators who share a passion for teaching respect and understanding through project-based learning.”

Moore spent the week of June 15 collaborating with peers from the U.S. and Europe on the fellows program, which prepares K-12 educators to “enhance student-led learning through positive role models – ‘Unsung Heroes’ – from history,” according to the LMC.

Winners were selected for their national or international recognition, demonstrating “exemplary educational accomplishments beyond the classroom.”

In 2013, Moore, née Berndt, won the prestigious Milken Educator Award, dubbed the “Oscar of Teaching.” A year later, she earned the Alumni of the Last Decade Award from her alma mater, Cardinal Stritch University. She teaches Spanish and design at Reagan, an MPS International Baccalaureate high school. Prior to that, she worked at Golda Meir School, where she earned Teacher of the Year honors from the Metropolitan Milwaukee Alliance of Black School Educators.

The Reagan teacher told the center that she believes all students can and will learn – and that she emphasizes global citizenship and creativity within the classroom.  “Embodying the true ideals of the IB education, Moore believes in creating a classroom that fosters 21st-century skills in authentic problem-solving,” the Milken Center wrote in a release.

Moore also wants her students to develop a love for language and communication. She advises the student newspaper at Reagan.