Brookshire was selected as the top candidate from a group of 250 by the OAAA Transition Committee. 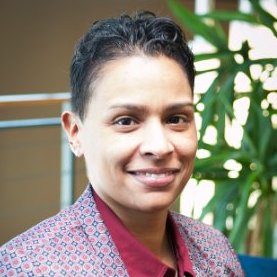 Ms. Brookshire’s appointment comes following a comprehensive national search, a series of public listening sessions and meetings with key social justice stakeholders, a strategic paid advertising campaign highlighting the Office in traditional print media, a targeted social media campaign, and — most importantly – at the recommendation of a community-driven panel of local leaders, spearheaded by Ralph Hollmon.

“I put a stake in the ground by prioritizing racial inequities, and we’re making progress as a community, but the addition of Nicole Brookshire will help take us to the next level,” County Executive Chris Abele said. “Precisely because the mission of this Office is so important, I wanted to make sure we took the time to find the right person, someone who understands Milwaukee and could earn the support of the community. We found that person in Nicole Brookshire. Nicole is a disciplined, accountable, performance-minded individual who has a proven track record of getting things done, and I’m excited to have her join the County team.”

“Milwaukee’s racial inequities won’t be solved overnight, but I am looking forward to partnering with my community to move the needle,” Nicole Brookshire said. “Together, we will hold each other accountable for real progress and take the work done thus far to the next level.”

Brookshire was selected as the top candidate from a group of 250 by the OAAA Transition Committee, a group of community leaders led by retired Milwaukee Urban League President, Ralph Hollmon. The group worked through a fair and transparent hiring process and had autonomy in selecting final candidates for the County Executive. County Executive Abele ultimately appointed the Committee’s top choice.

“Nicole is an outstanding person for this position” said Ralph Hollmon. “A number of good candidates were considered for the job, but we felt that Nicole has a great combination of skills, experiences and commitment which will enable her to work effectively with different sectors of the community to improve some of the dismal conditions that confront African Americans in Milwaukee County.”

Introduced by then-Supervisor Khalif Rainey and approved by the County Board, Milwaukee County’s Office on African American Affairs has the ambitious mission of recognizing and resolving the County’s racial inequities for the benefit of all of its citizenry and for the region to achieve its full potential. As Director, Brookshire will lead the implementation of coordinated plans in areas that include workforce development, criminal justice, and other strategic areas.

Nicole Brookshire has established herself in Milwaukee as a thoughtful, innovative, and collaborative problem-solver who is respected in the community and cares about getting results that matter. Most recently, Ms. Brookshire served as the Vice President of Operations for Junior Achievement of Wisconsin, where she managed a $5.4 million annual budget.

Previously, Brookshire served as the Grants Compliance Manager for the City of Milwaukee Community Development Grants Administration, where she administered annual budgets in the $10-$16 million range, standardized grant reapplication processes to bolster grantee accountability, and enhanced the City of Milwaukee and Milwaukee County Continuum of Care.

More About the Office on American Affairs

OAAA’s top priority is bolstering employment within the African American community. While Milwaukee’s racial issues are complex and interrelated, increasing access to good-paying jobs for all residents is a key component of any successful strategy for addressing racial inequities.

In just a few months, and without a dedicated staff in place, the Office has had great success with two workforce initiatives, the Opportunity Knocks program and UpLift MKE.

Opportunity Knocks, which launched in fall of 2016, is a novel housing model that utilizes home equity created through home renovation to fund reentry services and first-time home ownership. Opportunity Knocks takes tax-foreclosed homes in Milwaukee County’s suburban municipalities, renovates the homes while providing job training to nonviolent House of Correction (HOC) offenders, provides reentry services to the returning citizens after the renovation, and sells the house to a first-time homeowner through the County’s new Section 8 Homeownership Program paired with HOME funds for down payment assistance.

This program will help expand the House of Correction’s existing reentry services and job training and placement capability, allowing us to empower more people to live a better life.

The County has helped even more people to date with UpLift MKE, a unique job training and placement program that began one year ago. Working with community partners like the Milwaukee Bucks, Milwaukee County has already placed more than 100 individuals in jobs averaging more than $15 per hour through UpLift MKE. These job training and placement efforts are targeted directly to workers, particularly those in and near the Sherman Park area, who most need support to successfully climb the ladder of opportunity.

This program has been so successful that County Executive Abele expanded it less than a year in. His 2017 budget added an extra $500,000 in funding for UpLift MKE and $165,000 for the Boys and Girls Club of Milwaukee to add a Youth Career Development project manager to serve teenagers in Sherman Park and other areas. In 2015, more than 300 teenagers found employment through the efforts of the Boys and Girls Club, and this funding will expand their efforts.

For more information on the Office on African American Affairs, view the Annual Report and visit the website at county.milwaukee.gov/OAAA.