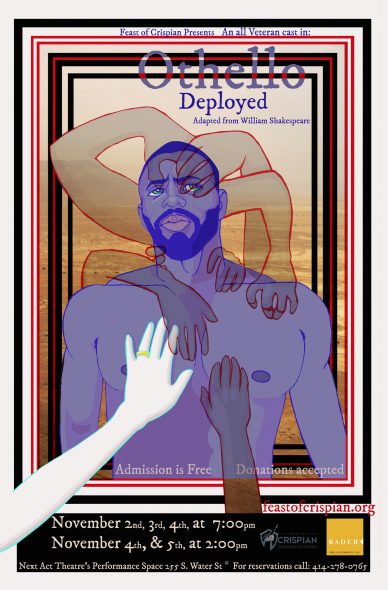 MILWAUKEE, WI (October 19, 2017) — From Nov. 2-5, Feast of Crispian military veterans and actors will perform Othello Deployed, an adaptation of William Shakespeare’s 1603 play, at Next Act Theatre. As this singular theater group’s third annual production, these five free performances will explore issues of race, living as “the other,” and how this relates to veteran’s experiences, in and outside of the military.

“Othello turns out to be a perfect exploration of what it means to be the other — meaning a black man in a white man’s world or a civilian wife on a military base,” says Feast of Crispian Project Director Nancy Smith-Watson. “It is a very powerful look at the stresses of military life and how they work inside of a unit.”

More than 700 veterans have experienced Feast of Crispian’s programs since the organization launched in 2013. This year, 12 Milwaukee veterans, in addition to local actors, will play the roles, with Mike Keppert and Mustafa Beyah both starring as the title role.

“Our country is currently in a crisis of need for programs that help veterans who are returning from war with wounds that keep them from successfully reconnecting with family, employment, and community,” says Nancy Smith-Watson. “Feast of Crispian is a unique program that reaches these inner wounds in a wide range of ways.”

All Feast of Crispian productions use parts or all of Shakespeare’s plays, which tackle social and cultural concerns that mirror issues veterans face today. Using the “mask of character,” organizers say, these veterans can explore their emotions in a safe environment.

Othello – Deployed is the group’s third full production. Last fall’s sold-out production, And Comes Safe Home, mixed Shakespearean scenes with original work and explored issues of grief, suicide, and the loss of a loved one. As its first full production, Feast of Crispian performed Julius Caesar in 2015.

While Othello – Deployed performances are free, seat reservations are encouraged.  To make a reservation, call 414-278-0765.

*Feast of Crispian organizers and participating veterans are available for interviews.

About Feast of Crispian

Feast Of Crispian is a nonprofit organization bringing together professional actors with post-deployment service veterans in order to teach and strengthen emotional resources that veterans need to overcome trauma and reintegration issues. For more information about Feast of Crispian, visit feastofcrispian.org.