The three-year project by Marquette biologists found that the amount of carbon absorbed in a tropical forest in Panama decreased by 76 percent per year when the woody vines, called lianas, were present. 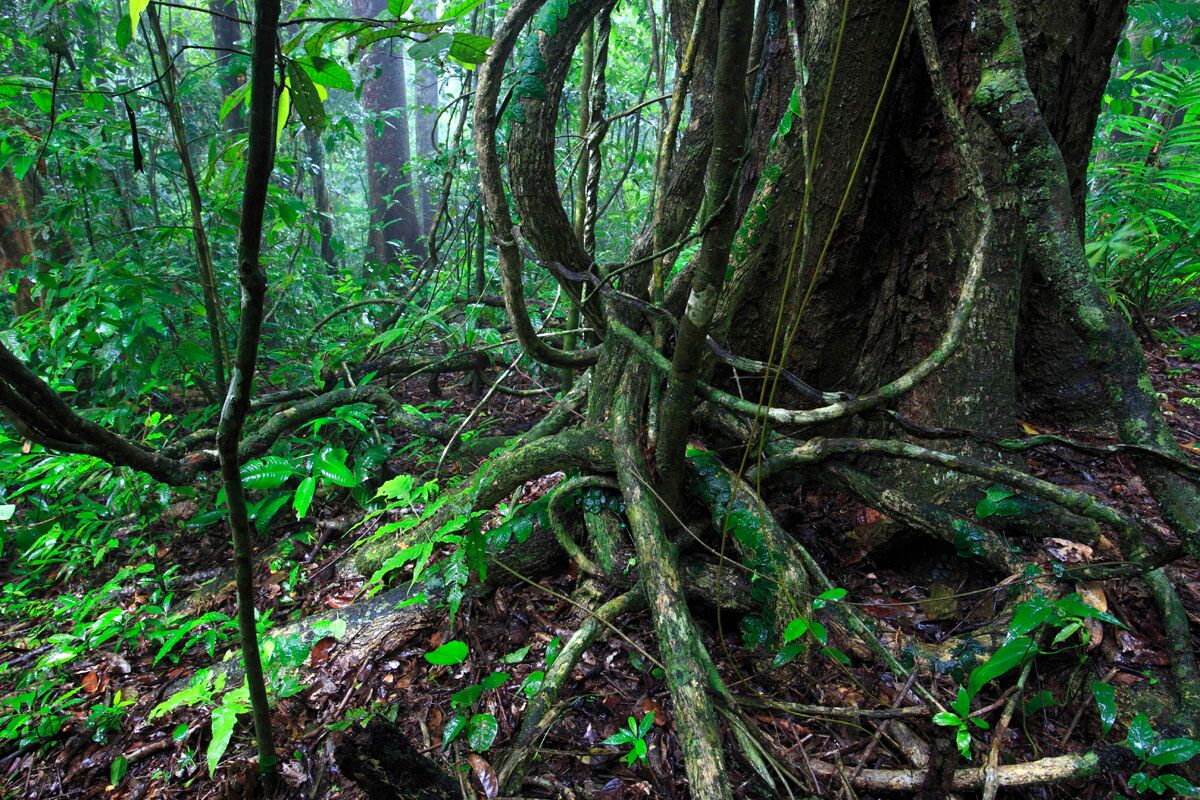 MILWAUKEE – An increase in woody vines in tropical forests may be significantly accelerating climate change, Marquette University scientists determined in a first-ever forest-level experimental study on the subject.

The three-year project by Marquette biologists found that the amount of carbon absorbed in a tropical forest in Panama decreased by 76 percent per year when the woody vines, called lianas, were present. The scientists said lianas could reduce storage of carbon by 35 percent in tropical forests over the next 50 years.

Tropical forests account for one-third of the carbon fixed by photosynthesis, acting as a major sink in the global carbon cycle.

“This has far-reaching ramifications,” said co-author Stefan Schnitzer, a biology professor at Marquette and a research associate at the Smithsonian Tropical Research Institute. “The effects of lianas on trees dramatically alter how carbon is accumulated and stored in tropical forests.”

Schnitzer and co-authors Geertje van der Heijden, a post-doctoral fellow in the Schnitzer Lab at Marquette, and Jennifer Powers, a professor at the University of Minnesota, conducted research on more than 25 acres in the Barro Colorado Nature Monument in Panama.

“Increases in liana density may be partially responsible for the long term decline in the Amazonian carbon sink, which in term contributes to increasing atmospheric CO2 levels and accelerated climate change,” the researchers said in a paper published today in the Proceedings of the National Academy of Sciences.

It is uncertain what is causing the increasing abundance of lianas, but it may be propelled by more severe seasonal droughts, changing climate and increased disturbance. In areas where lianas reduce the ability of forests to accumulate and store carbon, it could result in a positive feedback loop that accelerates climate change.

Lianas often make up more than 25 percent of species and woody stems in lowland tropical forests. They differ than trees in that a greater percentage of their biomass is invested in leaves, and they contribute comparatively little biomass to tropical forests.

Previous research by Schnitzer and collaborators has determined that lianas can have significant negative effects on forest biomass growth and accumulation. That research focused primarily on tree growth.

In the latest study, all lianas were cut in eight experimental plots in a 60-year-old secondary forest, but were left intact in eight others. For three years, Schnitzer and the researchers monitored the growth in diameter of trees and lianas in the plot, and collected and weighed dead leaves and other debris falling from the forest’s canopy.

In addition, the proportion of biomass in leaves versus wood under the two types of plots differed. Forest canopy productivity – mostly leaves – decreased by 14 percent in liana-free plots while the productivity of woody stems rose by nearly 65 percent.

“The lianas shifted biomass accumulation away from wood, which stores carbon for a long time, to leaves, which recycle quickly and release carbon back into the atmosphere,” Schnitzer said.

The researchers simulated the change of biomass stocks over the next 50 years in forests with lianas and without them to determine that vines could reduce long-term storage of carbon by 35 percent. An even greater reduction could take place if liana-tree competition intensifies.

The researchers noted that lianas are an important component of tropical forests and, although detrimental in terms of carbon storage, are beneficial for many other forest processes.

“They provide a wide range of resources for wildlife, such as fruits, seeds and fresh leaves,” Schnitzer said. “By connecting trees together, lianas provide aerial pathways that are used by the vast majority of arboreal animals to move through the forest.”

The Schnitzer Lab at Marquette University focuses on understanding the forces that structure plant communities, maintain species diversity, control species distributions and allow species to coexist. The lab implements a combination of observational and experimental studies designed to determine the mechanistic basis for plant species distributions, as well as how plant community diversity is maintained and how plant communities regenerate, compete and interact. The majority of its work is in tropical forests, but lab researchers also work in temperature forests and grassland.