In addition, Parolari and his team found that vegetation coverage was high in 2015 compared to previous years.

MILWAUKEE – The dust storm that triggered havoc in the Middle East last year likely was caused by extreme climatic conditions, not regional conflict, a new study by a Marquette University environmental engineer has found.

The massive storm in September 2015 killed at least a dozen people, whipping across seven countries while canceling flights and closing ports. It sent thousands of people to hospitals while covering parts of Iraq, Syria, Lebanon, Egypt, Jordan, Israel and Cyprus in an unprecedented haze.

Several reports at the time blamed land cover change, much of it attributed to the conflict in the area, including the desertion of agricultural land, reduced irrigation and increased military vehicle traffic over unpaved surfaces. 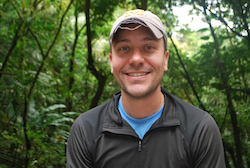 Research by Dr. Anthony Parolari, an assistant professor of environmental engineering at Marquette University, and others on an international team found the storm was caused by extremely hot and dry conditions coupled with cyclonic winds, according to a study published this month in Environmental Research Letters.

The researchers found that a cyclone and “Shamal” winds, typical drivers of dust storms in this region, were immediately followed by an unusual wind reversal at low levels that spread dust west to the Mediterranean coast. The researchers also studied surface air temperature, humidity and wind speed measurements, which showed surface conditions were much drier and hotter than normal. The extreme dry and hot conditions also enhanced dust availability for erosion, generating the storm.

In addition, Parolari and his team found that vegetation coverage was high in 2015 compared to previous years, negating the theories that agriculture abandonment due to recent drought or the regional conflict caused the storm.

“While climate, land use and conflict are all important factors in the complex human–environment dynamics that have been playing out in the Middle East as far back as 4,000 years ago, this particular storm appears to be explained by climate, not conflict and abandonment of agricultural land,” said Parolari, the study’s lead author.

Other researchers on the project were from Boston University; Princeton University; the Department of Environmental Physics and Irrigation, Institute of Soil Water and Environmental Services, AR.I-Volcani Center, Israel; and Duke University, where Parolari was a post-doctoral research associate before coming to Marquette this year.

About the Parolari Lab at Marquette
Housed in Marquette’s Opus College of Engineering, the Parolari Lab develops quantitative models that link hydro-climatic variability to terrestrial ecosystem processes. These models are used to quantify water movement in the environment and its role in ecological engineering problems, including agricultural water and nutrient management, stormwater management, and mitigating impacts of extreme drought. Read more at: www.aphydro.com.