The award grants up to $32,000 for a one-semester sabbatical. 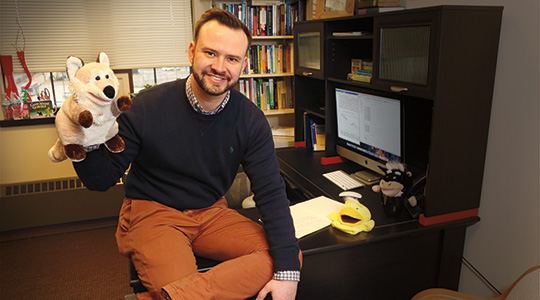 Heck conducts research that looks at the results of stress specific to a person’s sexual orientation and gender identity, as opposed to more general forms of stress. The award grants up to $32,000 for a one-semester sabbatical. Heck will use his sabbatical to make research his top priority.

Heck and his team, which includes 10 undergraduate and three graduate research assistants, are working to develop and validate a method for exposing LGBT individuals to a low level of stress that is specific to their sexual and gender minority statuses.

“Our field is in a place where we’re starting to develop tailored interventions for LGBT people to help them cope with stressors that are specific to their sexual orientation or gender identity,” Heck says. “One of the ways we might know whether those interventions work is by looking at individuals who have been exposed to them and seeing if we can identify specific psychological or biological processes that are associated with experiencing those forms of stress.”