Dr. John Borg has been at Marquette since 2002 and has worked to investigate how solid materials deform and flow. 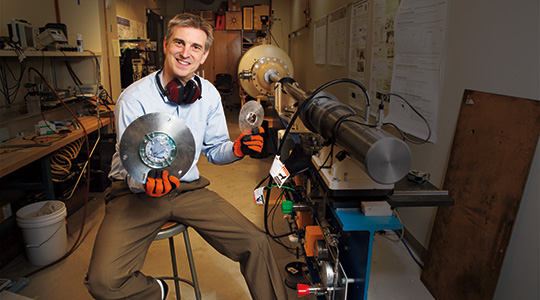 Borg has been at Marquette since 2002 and has worked to investigate how solid materials deform and flow. He is best known for his research on the physics of one of baseball’s most unique pitches — the knuckleball. His work has been featured on 60 Minutes Sports and the Discovery Channel and in Popular Mechanics.

Borg’s research has been published in more than 25 refereed journals and numerous government reports and has received significant funding from the Departments of Energy and Defense. He has also been a mentor for countless graduate student theses and dissertations and undergraduate student research experiences.

Borg, who was named this spring as the next chair of the Department of Mechanical Engineering, is working with the rest of the mechanical engineering faculty and staff to create, innovate and build a top-ranked department that is recognized for its transformative education, cutting edge research and commitment to Marquette’s Catholic, Jesuit mission.

The Lawrence G. Haggerty Faculty Award recognizes a faculty member who has demonstrated scholarly distinction and an all-encompassing belief in excellence.