Welburn, Ridgeway also elected to The Links board 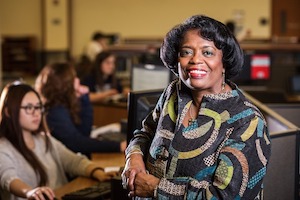 MILWAUKEE — Janice Welburn, dean of Raynor Memorial Libraries at Marquette University, has been elected as trustee for the American Library Association endowment fund. As an ALA endowment trustee, she will play a key role in ensuring a healthy financial outlook for the association.

With the ALA, Welburn will have a hand in holding, investing, reinvesting and disbursing endowment funds. She will also select investment managers, make procedure recommendations and report the status of the endowment to leadership and membership.

“It is truly an honor to be selected as a trustee for ALA’s endowment,” Welburn said. “I look forward to working with the other board members to enhance the association‘s financial ability to support its programs and further support libraries of all types throughout the United States.”

The ALA — the largest library association in the world — is a nonprofit organization based in the U.S. promoting libraries and library education both nationally and internationally.

Welburn will serve as an endowment trustee for a three-year term.