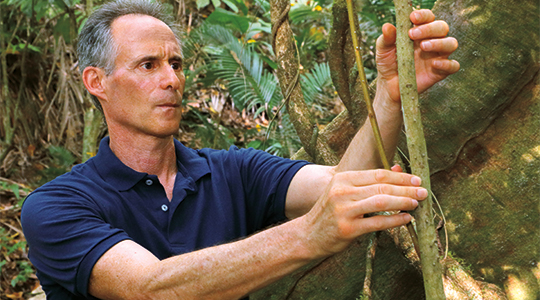 MILWAUKEE — Dr. Stefan Schnitzer, Mellon Distinguished Professor of Biological Sciences in the Klingler College of Arts and Sciences at Marquette University, has been awarded a grant of more than $900,000 from the National Science Foundation to conduct a research project to explain how tropical forests maintain extraordinarily high levels of species diversity.

The grant through the National Science Foundation’s Division of Environmental Biology, totaling $915,000 over the course of five years, supports Schnitzer in continuing a research project he started in 2008 — Lianas as a Keystone Guild in Tropical Forests: An Experimental Test.

Schnitzer — an expert in plant community and forest ecology, and principal investigator for the study — said he will test the hypothesis that lianas maintain tree diversity for the entire tropical forest community. Lianas are long-stemmed, woody vines rooted in the soil that use trees and other means of support to climb up to the canopy to access well-lit areas of the forest. The hypothesis suggests lianas suppress and prevent the most dominant, aggressive tree species from displacing less aggressive or subordinate tree species, therefore maintaining tree species diversity.

“I am thrilled and very fortunate to receive this generous award from NSF. The award will make this project one of the longest-running tropical plant experiments ever conducted,” Schnitzer said. “The funded project is to test an often-overlooked theory to explain species coexistence in nature. We will test this idea in tropical forests of Panama, where thousands of species have coexisted for millions of years.”

During the experiment, Schnitzer will remove lianas from large portions of a tropical forest and compare changes in tree species richness, diversity and composition to similar areas of forest where lianas are present.

The hypothesis, Schnitzer said, has been tested successfully in simple marine ecosystems, but has never been attempted in complex ecosystems such as tropical forests.

If lianas do as the hypothesis theorizes, Schnitzer can, for the first time, determine whether lianas are a “keystone species” or “keystone guild” that maintains tree species diversity in tropical forests.

Dr. Michelle Mynlieff, chair and professor of biological sciences, said the department is incredibly proud of Schnitzer’s accomplishments and excited to see what his research uncovers.

“Since joining the faculty of the Biological Sciences Department as a senior member five years ago, Dr. Schnitzer has been instrumental in building up our ecological group by attracting both students and faculty,” Mynlieff said. “This newly awarded NSF grant will support his investigations into the role of woody vines in maintaining plant species diversity in tropical forests. His studies will provide information on how species diversity is maintained, which is critical for the overall health of ecosystems.”