Photo gallery link below; new inductees include NFL player, entertainers, researchers, educators and the financial adviser whose story inspired the film "The Pursuit of Happyness"

Inductees include a medical school professor, a popular radio host, a Marine veteran and championship NFL player, a restaurant owner, a member of the Milwaukee Board of School Directors, a longtime educator, a physician and medical researcher, a Broadway wardrobe supervisor, a well-known entertainer, a financial adviser once played by actor Will Smith and a scientist who worked on the famed Manhattan Project atomic bomb research. 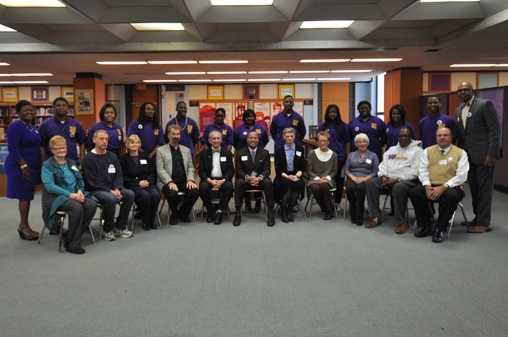 Each of the 11 new honorees was inducted by a current student at Washington High School of IT. The school offers Information Technology coursework, arts and music courses, college-level Advanced Placement courses, the acclaimed Project Lead the Way pre-engineering curriculum and a culinary program along with extracurricular programming including a robotics team and athletic teams.

The Washington High School Alumni Scholarship Foundation, which set another new record this year for the number of scholarships it provides to Washington grads, created the Hall of Fame.

“Our aim has always been to let current students know that other successful men and women have walked the halls of Washington,” WHS Alumni Scholarship Foundation President Steven Brown said.

“The Hall of Fame and the Alumni Scholarship Foundation are impressive and important reminders to our students that, in addition to our educators and our students’ families, there is another community of individuals who are committed to seeing them succeed,” Washington Principal Tonya Adair said.

This year’s inductees are:

– Dr. Barbaras, Class of 1937, who was first exposed to science courses at Washington and went on to pursue and earn a Ph.D. in chemistry from the University of Chicago; he later joined the Manhattan Project, where he worked for three years before becoming a research manager for DuPont

– Marlin “Pat” Harder, Class of 1940, who played football at Washington and the University of Wisconsin-Madison before joining the Marine Corps during World War II; after his service, he played professionally, helping the NFL’s Detroit Lions win back-to-back NFL championships; Harder will be honored posthumously

– Dr. Lynn Taussig, Class of 1960, who is the author of more than 180 scientific publications; Dr. Taussig is a special advisor for life sciences at the University of Denver and is a renowned authority on asthma, bronchitis, cystic fibrosis and respiratory tract diseases and infections

– Alyce Gilbert, Class of 1961, the very first recipient of the WHS Alumni Scholarship; Ms. Gilbert got her start in drama at Washington and went on to become a wardrobe supervisor on Broadway who earned “Tony Honors” in 2007 and whose credits include “A Chorus Line” and the hit show “Wicked”

– James “Jim” Kurtz, Class of 1962, a Washington student who came back to teach at the school; Mr. Kurtz also coached track, cross country and football and directed numerous plays and musicals before become a district administrator, helping to develop computer-assisted programs for Milwaukee Public Schools; Mr. Kurtz will be honored posthumously

– Dr. John Klein, Class of 1969, who was a world-renowned expert in biostatistical research methods; Dr. Klein was the statistical director at the Ohio State University Comprehensive Cancer Center before joining the Medical College of Wisconsin, where he served as a professor from 1993 until the time of his death; Dr. Klein will be honored posthumously

– David Seebach, Class of 1969, a well-known magician; Mr. Seebach has performed for clients including Ford, GE, IBM and Pepsi, entertained local audiences at Summerfest, won the industry’s coveted “Best of the Best” trophy and has performed for American troops in Bahrain, Diego Garcia and Singapore

– Jeffery M. Steren, Class of 1969, who went on to graduate from the University of Pennsylvania’s prestigious Wharton School and is the owner and operator of 11 McDonald’s restaurants in the Milwaukee area; Mr. Steren is also a dedicated volunteer, supporting groups including the United Way and the Milwaukee Jewish Federation

– Christopher Paul Gardner, Class of 1971, who joined the Navy and later began a career in finance, working for powerhouses Dean Witter Reynolds and Bear Stearns before starting his own firm; Gardner documented his road to success in his autobiography, “The Pursuit of Happyness,” which became a popular motion picture

– Mark Sain, Class of 1977, who rose to the rank of assistant chief with the Milwaukee Fire Department; Mr. Sain provided leadership to more than 1,100 members and managing a $92 million budget before being elected to the Milwaukee Board of School Directors, currently serving as the representative of the 1st district

A photo gallery is available at http://www5.milwaukee.k12.wi.us/school/whsoit/2014/10/17/manhattan-project-scientist-among-11-washington-alums-inducted-into-hall-of-fame-photos/.