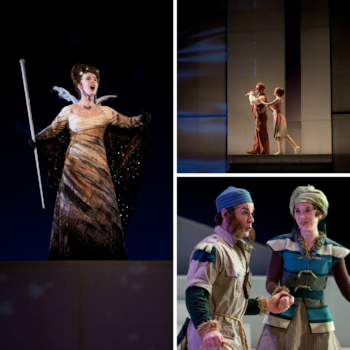 Photos from the 2009 Florentine production of The Magic Flute

MILWAUKEE, Wis.—March 26, 2018— Milwaukee families can enjoy an opera classic with the Florentine Opera at The Magic Flute, May 11 and 13 in Uihlein Hall at the Marcus Center for the Performing Arts. Originally written in German, this Florentine production will be performed in English to be accessible to audiences of all ages.

Mozart’s The Magic Flute follows Prince Tamino and the bird-catcher Papageno as they embark on an epic quest to rescue the beautiful Pamina from the evil Queen of the Night. Featured in this production are several returning Florentine favorites:

The production also includes the notable Florentine debuts of Argentinian Soprano Laura Pisani as the Queen of the Night and Baritone Will Liverman as Papageno the bird-catcher.

Kids can see it for free!
The Florentine is offering a special family deal for both performances. Available only through the Florentine Opera box office at (414) 291-5700 ext. 224, use code “FAMILYBOGO” to receive a free student ticket (for children under the age of 18) with every full-price adult ticket purchased.