"I’m grateful to Feminist Majority PAC for their support."

“I’m grateful to Feminist Majority PAC for their support,” said Roys. “Working together, we can help ensure that women and people of color achieve fairer representation. As governor, I will restore opportunity and fairness to Wisconsin, and make sure no one is left behind.”

Kelda Roys, 39, is a small business owner, attorney, former state representative, and past head of NARAL Pro-Choice Wisconsin who has been standing up for women and families throughout her career. In the Assembly, she stood out as an influential and effective lawmaker, delivering results for working families and helping lead the opposition to Governor Scott Walker’s divisive agenda. As a parent and step-parent of four girls, Roys will fight for paid family leave, affordable childcare, great schools, and quality healthcare for all. In a year in which Wisconsin voters are ready for change, Kelda Roys provides the clearest contrast to Scott Walker. 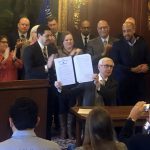