Associated Bank and Brewers Community Foundation were recognized as “All Stars” for working in partnership with HRI to strengthen neighborhoods by supporting local homeowners. 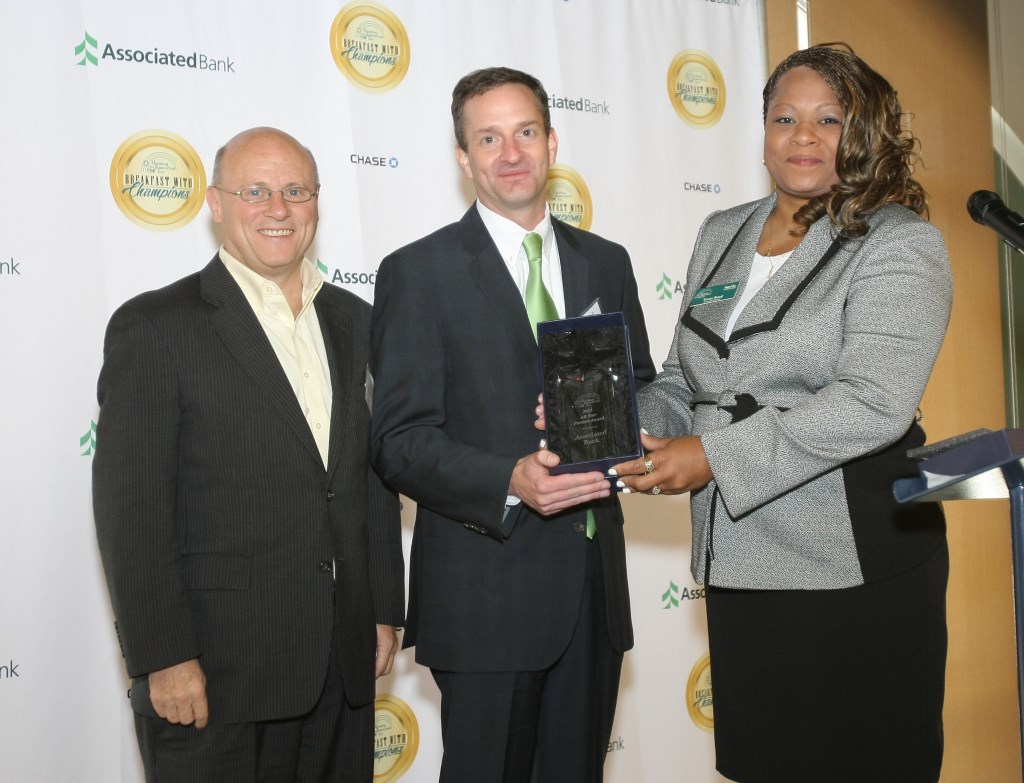 During the 2015 baseball season, Associated Bank and Brewers Community Foundation teamed up to support HRI through their “Hits for Homes” initiative. For every Brewers hit recorded during home games, Associated Bank and Brewers Community Foundation donated $250 to HRI.  The “Hits for Homes” program wrapped up with a $100,000 donation to HRI’s Minor Home Repair program, which provides affordable home repair grants to homeowners who experienced financial distress and deferred maintenance on their properties in Milwaukee County, Ozaukee County, Washington County and Waukesha County.

“We are deeply grateful and honored to be recognized for a strong, long-term partnership with Housing Resources, Inc.,” said Christopher Piotrowski, executive vice president and chief marketing officer at Associated Bank. “Our work together allows people to achieve their dream of owning and maintaining their home, which helps to stabilize and revive neighborhoods in Milwaukee County.”

“Brewers Community Foundation appreciates the opportunity to partner with HRI and Associated Bank,” said Cecilia Gore, executive director at Brewers Community Foundation.  “Both organizations are perfectly aligned with our desire to improve the quality of life in the community.  We look forward to continued efforts which positively impact children and their families in Greater Milwaukee and Wisconsin.”

Housing Resources, Inc. (HRI) was founded in 1991 as a 501(c)3 organization dedicated to providing education and counseling to first-time low and moderate income homebuyers.  HRI’s mission is to empower people to live their dream of homeownership through education, advocacy and supportive services.  HRI has successfully assisted thousands of individuals and families in achieving their goal of homeownership, as well as provided services that help homeowners maintain their homes.

Housing Resources, Inc. is a chartered member of NeighborWorks®; a nationwide network of 240 trained and certified community development organizations at work in nearly 4,000 communities across America. Working in partnership with others, NeighborWorks® organizations are leaders in strengthening communities and creating affordable housing opportunities for low- and moderate-income families.

Associated Banc-Corp (NYSE: ASB) has total assets of $27 billion and is one of the top 50, publicly traded, U.S. bank holding companies. Headquartered in Green Bay, Wisconsin, Associated is a leading Midwest banking franchise, offering a full range of financial products and services from over 200 banking locations serving more than 100 communities throughout Wisconsin, Illinois and Minnesota, and commercial financial services in Indiana, Michigan, Missouri, Ohio and Texas. Associated Bank, N.A. is an Equal Housing Lender, Equal Opportunity Lender and Member FDIC. More information about Associated Banc-Corp is available at www.associatedbank.com.

Brewers Community Foundation harnesses the pride, passion and commitment of Brewers fans, players and other supporters to positively impact the lives of children and their families in Greater Milwaukee and Wisconsin. The Foundation’s funding efforts strategically extend financial support to nonprofits that provide quality programming in the areas of health, education, recreation and basic needs, with a particular focus on low-income and disadvantaged youth and their families.

Associated Bank and Brewers Community Foundation were recognized as “All Stars” for working in partnership with HRI to strengthen neighborhoods by supporting local homeowners.