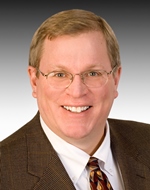 Jeff Lyon. Photo from the State of Wisconsin.