Yeah, we're gonna need you to come up with some new talking points. 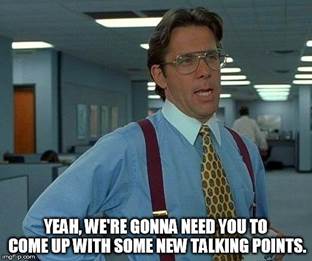 “Yeah, we’re gonna need you to come up with some new talking points.”

Madison – Governor Scott Walker addressed business leaders at the Wisconsin Manufacturers & Commerce (WMC) Business Day yesterday in Madison 2016. During the event, the Governor recited a series of misleading statements and irrelevant details to downplay recent news showing a bleak state budget forecast and a state economy chronically lagging the rest of the nation.

Rep. Hintz has placed Gov. Walker’s statements within the context of reality:

“Wisconsin has seen tremendous growth in the past year and the state of our state is strong.”

At the end of January, the Bureau of Labor Statistics released new quarterly jobs data showing that Wisconsin now ranks 37th in private-sector job growth (8th out of 10 in the Midwest) over the past year covering June 2014 to June 2015. Wisconsin’s job growth rate over that span is nearly half the national growth rate.

“More people are working in Wisconsin and our Labor Force Participation Rate is 68 percent – 5.4 points higher than the national rate.”

This is not significant or new in any meaningful way. Wisconsin has typically had a higher labor participation rate than the rest of the U.S. going back to 1990. And the Labor Force Participation Rate was actually higher under Governor Doyle than it is now.

“We also finished the fiscal year with a $135.6 million budget surplus.”

The majority of the “surplus” was manufactured by raiding $98 million from compensation reserves and delaying a $108 million debt payment that was due in May of 2015, a move which will create additional debt service payments and interest costs in the next budget.

“We’re focused and committed to building a stronger Wisconsin than the one we grew up in and we will continue to invest in our priorities to ensure anyone who wants a job can find a job.”

Yesterday as Governor Walker made this statement, the University of Wisconsin—Madison’s Applied Population Laboratory Poverty in Wisconsin released a new analysis that showed poverty in Wisconsin has hit its highest level in 30 years during a five-year period that ended in 2014.

“The data tell us that poverty has been getting worse in Wisconsin,” says Malia Jones, an assistant scientist and social epidemiologist at the lab. “Poverty went up significantly, even during a time when the nation’s economy was improving.”