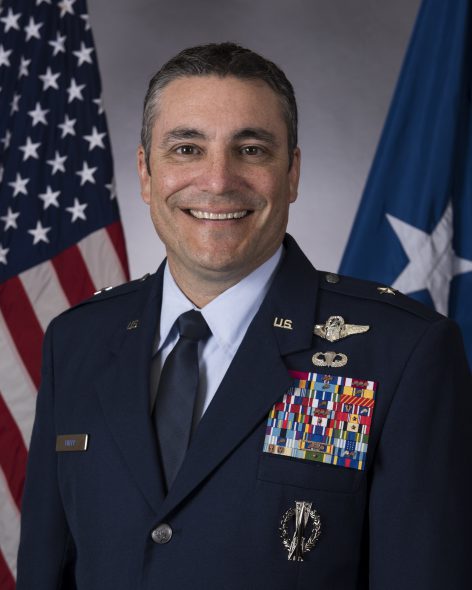 MADISON— Gov. Tony Evers today announced he has selected Brig. Gen. Paul Knapp as the next Adjutant General of the Wisconsin National Guard. Brig. Gen. Knapp will serve a 5-year term as the head of the Wisconsin National Guard and the Department of Military Affairs. Concurrent with his appointment as Adjutant General, Knapp will be promoted to the rank of Major General.

“Brig. Gen. Knapp is a dynamic, proven leader who has selflessly served our nation during his 28-year military career,” said Gov. Evers. “His strong leadership and dedication to the State of Wisconsin are a perfect fit for the Wisconsin National Guard during this time of transition.”

Currently, he is the mobilization assistant to the Commander of the Air Force Nuclear Weapons Center, overseeing more than 1,300 personnel at 18 locations around the world. He also currently performs alert duty as an Airborne Emergency Action Officer in command of the joint battle staff aboard the Airborne Nuclear Command Post which provides survivable, mobile command and control of U.S. nuclear forces in support of the Commander of U.S. Strategic Command and the President of the United States.

“Being appointed as the Wisconsin Adjutant General by Governor Evers is a dream job for this kid from Antigo, Wisconsin, who chose a military career,” said Brig. Gen. Knapp. “I am humbled, grateful, and privileged to serve the professional soldiers, airmen and civilians of our amazing state.”

Brig. Gen. Knapp’s appointment fills a vacancy created by the resignation of Maj. Gen. Donald Dunbar in December. Gov. Evers called for the resignation after a top-to-bottom review of the Wisconsin National Guard detailed system failures in its handling of sexual assault, sexual harassment, and retaliation allegations. A nation-wide search was conducted to find a successor. On January 17, 2020, an expert panel of current and retired military officers, including the adjutant generals of Georgia and Maine, interviewed applicants and recommended finalists to Gov. Evers.