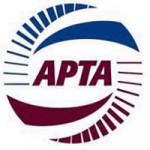 Failure to Restore and Modernize U.S. Public Transit Results in a Loss of $340 Billion in Business Revenue, According to APTA Study

Congress Has Opportunity to Address This Shortfall Through FY2019 Appropriations

Washington, DC.  Decades of under investment in America’s aging bus and rail public transit infrastructure has a negative effect on business revenue, and results in lost jobs and wages, according to a new study from the American Public Transportation Association.

Failing to address America’s $90 billion backlog of public transit modernization needs, also referred to as State of Good Repair, results in a loss of $340 billion in business revenue to the U.S. economy over a six-year period.  This is based on the study The Economic Cost of Failing to Modernize Public Transportation, which was conducted by the Economic Development Research Group Inc. for APTA.  The study was released during National Infrastructure Week which is held May 14 – 18.

Modernization deficiencies in the nation’s public transit infrastructure result in a decrease of $180 billion in Gross National Product. This includes a loss of $109 billion in household income over six years and 162,000 jobs over the same time frame.  The authors of the study note that failure to modernize the nation’s aging public transit infrastructure adds time and delays to commutes.  This, in turn, slows down workers’ economic output which directly impacts business sales in a regional economy.

In addition, the quality of businesses that locate in an area is tied to the efficiency of a transportation system, and this directly impacts workers’ earning potential.  For example, officials at Amazon are searching for a second headquarters in North America. With the addition of this new $5 billion facility, Amazon will generate 50,000 high-paying jobs with yearly salaries of $100,000 or more.  Amazon’s project summary describes the importance of an efficient transportation system as a part of its ideal location requirements.  Specifically, the company notes “optimal access to mass transit – direct access to rail, train, subway/metro, and bus routes.”

“We thank Congress for their recent bi-partisan effort in passing its fiscal year 2018 budget and the President for signing it.  This budget included significant increases in federal investment in public transit,” said Skoutelas.  “While this is a positive step forward in helping to address the nation’s aging public transit infrastructure, this momentum must be maintained by providing similar funding levels for 2019.”

Skoutelas added, “We are also calling on the Administration and Congress to address the urgency of the Highway Trust Fund solvency which expires in just over two years. This will provide predictable, multi-year funding to not only address America’s deteriorating infrastructure but provide for continued investment to help grow the nation’s economy.”

America’s aging public transit infrastructure is in grave need of investment.  In their latest report card, the American Society of Civil Engineers graded the nation’s public transportation infrastructure a D minus.  That is the lowest grade ASCE gave to any category of U.S. infrastructure.