Evelyn Patricia Terry: America’s Favor/Guests Who Came to Dinner (and Stayed!) Opens at Lynden this Sunday

Terry brings together different bodies of work: an iconic table installation, artist books, and mixed media works that layer drawings and other forms of mark-making on sewn rag paper pieces. 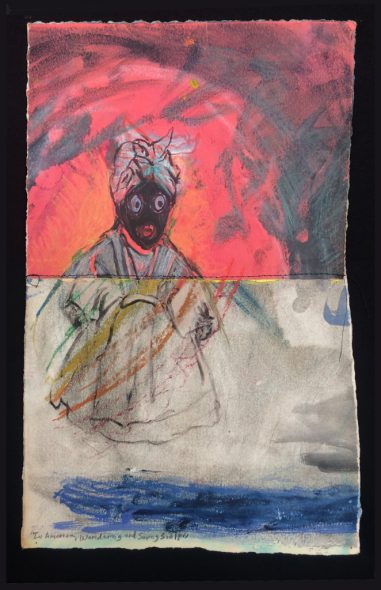 Evelyn Patricia Terry: America’s Favor/Guests Who Came to Dinner (and Stayed!) opens at the Lynden Sculpture Garden on Sunday, April 28, 2019 with a reception from 3 to 5 pm. The reception is free and open to the public. “America”—from its origins to present day news reports of racial and ethnic interactions–is a recurrent theme in Terry’s work. Over the course of more than fifty years, she has made several bodies of work that address the “conundrum of co-existence that repeatedly occupies the news, my thoughts, and many conversations.” In America’s Favor/Guests Who Came to Dinner (and Stayed!), the most recent in a series of exhibitions on the theme, Terry brings together different bodies of work: an iconic table installation, artist books, and mixed media works that layer drawings and other forms of mark-making on sewn rag paper pieces.

In the rear of the building, Terry will be exhibiting nine works from her Play the Race Card series. The series dates from 2006-7, when Terry began using torn canvas strips recycled from previously set-aside paintings. Focusing on two politically and emotionally charged color groupings, “red, black and green” and “red, white and blue,” on a backdrop of other colors, this work promotes race conversations as commonplace topics like weather–absent the political biases, empowerment drain, and emotional damage harbored.

The exhibition remains on view through Sunday, July 28, 2019. The Lynden Sculpture Garden is located at 2145 West Brown Deer Road, Milwaukee, WI 53217. During the course of the exhibition, Terry will be offering a series of hands-on workshops at Lynden.

America’s Favor/Guests Who Came to Dinner (and Stayed!), is part of Lynden’s 2019 Call & Response programming. Call & Response is an ongoing project that gathers a community of artists who share a commitment to the radical Black imagination as a means to re-examine the past and imagine a better future. Other participants in the 2019 programming include indigo activist Arianne King Comer, visual artist and Nohl Fellow Rosemary Ollison, filmmaker and storyteller Portia Cobb, chef and food scholar Scott Barton, choreographer Reggie Wilson, visual artist Daniel Minter, and performance collective Propelled Animals, among others.

More information and a schedule of workshops at: https://www.lyndensculpturegarden.org/exhibitions/evelyn-patricia-terry

Documenting Life at Lynden During a Pandemic