CUB: PSC misses the mark by approving a risky power line that may never deliver on its promises

In addition, the applicants’ analysis was insufficient regarding advances in utility-scale solar projects and battery storage.

CUB’s legal brief in the case, filed in July, disputes evidence claiming that the line is needed for reliability and that it will deliver promised benefits. Furthermore, the application to build the line failed to provide a complete analysis and left too many questions unanswered regarding the risks to ratepayers and the ability of the project to deliver low-cost energy.

“The PSC found that this project will deliver renewable energy and savings for Wisconsin customers. We certainly hope that is the case, but our expert’s analysis found otherwise, and we continue to believe that Wisconsin customers are at risk that the costs they face won’t be offset by the benefits the line brings to the state,” said Tom Content, CUB’s executive director.

CUB’s brief also warned that the line may not bring in low-cost wind power.

“The PSC justified its decision in part on the ability of the line to bring in low-cost renewable energy. However, this is not guaranteed,” said Content. “The utilities themselves never modeled how much new wind power would be generated by this project, and the limited analysis they did perform showed the line would bring only a small amount of wind and solar power into Wisconsin.”

In addition, the applicants’ analysis was insufficient regarding advances in utility-scale solar projects and battery storage.

“CUB continues to believe that time has passed this project by, given advances in technology that have brought down the cost of alternatives such as solar and storage,” concluded Content.

The Citizens Utility Board Is a member-supported, nonprofit organization that advocates for efficient and reliable utility service at the lowest rates possible consistent with sound business principles. CUB represents the interests of Wisconsin’s residential, farm, and small business customers of electric and natural gas utilities before the Legislature, state and federal regulatory agencies, and the courts.

Recent Press Releases by Citizens Utility Board of Wisconsin 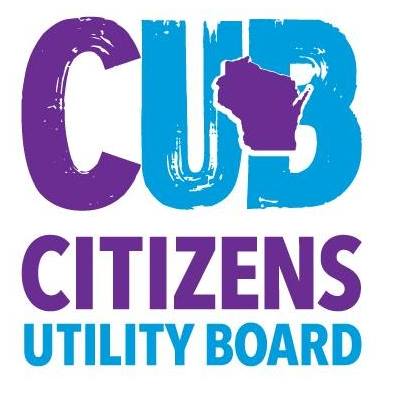 Dec 22nd, 2020 by Citizens Utility Board of Wisconsin

Nov 6th, 2020 by Citizens Utility Board of Wisconsin

Jul 23rd, 2020 by Citizens Utility Board of Wisconsin