MADISON, WI – In the week after the presidential election, misinformation has circulated on social media and political websites raising unfounded rumors about the integrity of Wisconsin’s election results.

“Wisconsin’s election was conducted according to law and in the open,” said Meagan Wolfe, Wisconsin’s chief election official. “While the results are still unofficial and are currently being triple checked as part of the canvass and certification process, we have not seen any credible information to cast any doubt on those unofficial results.”

Wolfe further stated, “When issues are reported to our office, we take them very seriously.  We look into each allegation and request evidence from parties involved.  At this time, no evidence has been provided that supports allegations of systemic or widespread election issues.”

“Unfortunately, we are seeing many concerns that result from this unsubstantiated misinformation.  We want Wisconsin’s voters to know we hear their concerns and to provide facts on these processes to combat the rumors and misinformation,” Wolfe said.

Every step of the election process is publicly observable and transparent, Wolfe said.  This includes voting at the polls on Election Day and the counting of absentee ballots.  It also includes the canvass and certification of the tally that is happening right now in counties across the state.  Every ballot cast in Wisconsin has a paper audit trail.  Voting equipment is randomly selected for audit after the presidential election and the paper trail is audited against the electronic vote totals; this process is conducted as part of a public meeting. If there is a recount, these materials will again be analyzed, as they were in 2016.

“Election results in Wisconsin are triple-checked for accuracy before they are certified,” Wolfe said. “Your municipal and county clerks, and the staff of the Wisconsin Elections Commission are looking at everything to ensure the will of the voters is carried out and to affirm that only valid ballots were cast and counted.”

In response to the misinformation, the WEC today released a list of the top facts about Wisconsin elections. This list is in addition to last week’s news release which addressed rumors like Wisconsin having more votes than registrations and ballots being added to the unofficial totals on the morning of November 4, that release can be found here: https://elections.wi.gov/node/7235.

1. Wisconsin voters can trust their vote was counted.

“Many voters are visiting our MyVote Wisconsin website to check their records,” said Wolfe.  “As allowed by state law, it can take 45 days after a presidential election for local clerks to record everyone’s paper registrations and voter participation into the electronic statewide voter database.  If you do not see your participation or registration recorded right away, don’t worry it takes time to get all of the data entered into the system.

A message on the MyVote.wi.gov website informs voters how long it can take to enter participation.  Wolfe said the MyVote website absentee ballot tracking feature will continue to show voters whether their absentee ballot arrived.

Wolfe noted that in the last three presidential elections, Wisconsin had among the lowest rates of mail ballot rejections and other problems in the nation, according to the Elections Performance Index, a state-by-state data monitoring project maintained by the Massachusetts Institute of Technology.

However, voters should note that their record will never contain information on how you voted.  State and federal law protect voter anonymity. Once you cast your ballot, who you voted for can not be tracked back to you.  Your paper ballot is always anonymous, and it cannot be tied to your voter participation record.

2. Minor news media errors in reporting Wisconsin’s unofficial results do not affect the outcome of the election.

“Several people have contacted us about discrepancies they may have seen in unofficial results on media websites or TV broadcasts on Election Night,” Wolfe said.  “They believe that these reporting errors are evidence that vote totals were somehow changed or flipped. Nothing could be farther from the truth.”

Wolfe explained that Wisconsin does not have a statewide system for reporting unofficial results on Election Night, and there is no central official website or feed where results are reported.  State law requires that counties post the unofficial election night numbers for each polling place.  The unofficial statewide and county results numbers that the public sees on Election Night and the days thereafter come from the news media, including the Associated Press, which collects them from the 72 county clerks’ websites.

One false rumor circulating now is that results were flipped in Rock County on Election Night, based on screenshots from FOXNews.com.  According to the Associated Press, there was an error that occurred in the way they gathered results from Rock County’s website which caused AP to transpose results for Joe Biden and Donald Trump. An AP correspondent noticed the error within a few minutes and corrected it, according to a statement from the newswire:

Patrick Maks, media relations manager for The Associated Press said, “There was a brief technical error in AP’s collection of the vote count in Rock County, Wisconsin, that was quickly corrected. AP has myriad checks and redundancies in place to ensure the integrity of the vote count reporting. We are confident in what we have delivered to customers.”

There have been similar false claims about numbers on a CNN broadcast around 4 a.m. Wednesday when the city of Milwaukee’s absentee ballot results were added to ballots cast at the polls on Election Day.

“Voters should be extremely cautious about drawing any conclusions based on changes in numbers during Election Night reporting,” Wolfe said.  “The news media is doing its best to report accurate results, but sometimes they make minor mistakes.  These errors have nothing to do with Wisconsin’s official results, which are triple checked at the municipal, county and state levels before they are certified.”

3. Absentee ballots were counted properly, regardless of when the results were reported.

There are 39 municipalities which count their voters’ absentee ballots at a central location.  Because several municipalities could not finish processing their absentee ballots by the time the polls closed at 8 p.m. on Election Day, there was a delay in reporting those results to county clerks.  This was especially true in major cities including Milwaukee, Green Bay and Kenosha, where final unofficial results were reported after 3 a.m. Wednesday.

“Due to the pandemic and the high number of absentee ballots, it took until early Wednesday for all the unofficial results to come in,” said Wolfe.  “It does not mean something went wrong – it means election officials did their jobs and made sure every valid ballot was counted.”

In Wisconsin, voters must be registered before they can request an absentee ballot.  Voters then need to submit a valid request for an absentee to their municipal clerk who sends the ballot and tracks it in the statewide database and using USPS intelligent mail barcodes.  When a voted ballot is received by your clerk, it has to be recorded that it was received.  On Election Day and night, only ballots issued to registered voters, with a valid request on file, and with completed certificates signed by the voter and their witness, are counted.  If any of these elements are missing, the ballot is rejected and is not counted.

Some central count municipalities, including Milwaukee and Green Bay, took extra steps to provide the public and the media with live webcams of the absentee tabulation, and the physical locations were all open to the public and the media. Representatives of both major political parties were present, as well as independent poll watchers.

“Despite this transparency, we have seen unfounded allegations that clerks and poll workers stopped counting, that they mysteriously found absentee ballots in the middle of the night, or that all the votes on absentee ballots were only for one candidate,” Wolfe said. “It’s just not true.”

The Wisconsin Elections Commission anticipated there would be misinformation about late absentee ballot reports in central count municipalities.  To proactively provide insight into the process of counting and reporting absentee ballot totals, the WEC put out news releases in advance of the election and even produced a video about how results get reported. https://elections.wi.gov/2020

4. The pens or markers used by some voters did not prevent their ballots from being counted.

Wolfe said that voters have contacted the WEC because of posts they saw on social media about the use of felt tip pens or “sharpies” on ballots.  “Voters do not need to worry, their ballots were counted,” Wolfe said.  “Voting equipment in Wisconsin is tested at both the local, state, and federal level for all kinds of pens and other marking devices.  While we recommend that voters use the pen or marking device provided at their polling place or as instructed in their absentee ballot, the use of a felt-tip pen doesn’t invalidate a ballot.”

5. Wisconsin ballots do not have any special encoding with invisible watermarks or blockchain codes.

Wisconsin county clerks are responsible for printing ballots which are distributed to municipal clerks, Wolfe said. “The secrecy of your ballot is safe,” Wolfe said.  “Clerks do not print any watermarks or codes on them that would identify any voter or political party.” Ballot anonymity is a requirement of the law, and what candidate a voter chose is not a part of their record.  The state of Wisconsin also does not track party affiliation.  Local election officials do not know voter’s party preference when issuing ballots.

Another unfounded claim is that just before the election the WEC illegally told clerks they could add witness addresses to absentee ballot certificate envelopes. Here are the facts:

7. The WEC followed the law and court orders about the ERIC Movers list.

There have been unfounded allegations that the WEC violated the law by not removing approximately 232,000 voters from the registration list because they may have moved.

The Wisconsin Court of Appeals ruled in February 2020 that WEC could not remove voters from the registration list.  The court case, Zignego v. Wisconsin Elections Commission, was argued before the Wisconsin Supreme Court in September and no decision has been issued yet.  The WEC will follow the Supreme Court’s decision once it is issued.

The current process requires anyone who may have moved to affirm their address when receiving a ballot.  These voters have a watermark next to their name in the poll book and are asked to sign to affirm that they still live there.  If any voter has moved, they are directed to register to vote before they can be issued a ballot. 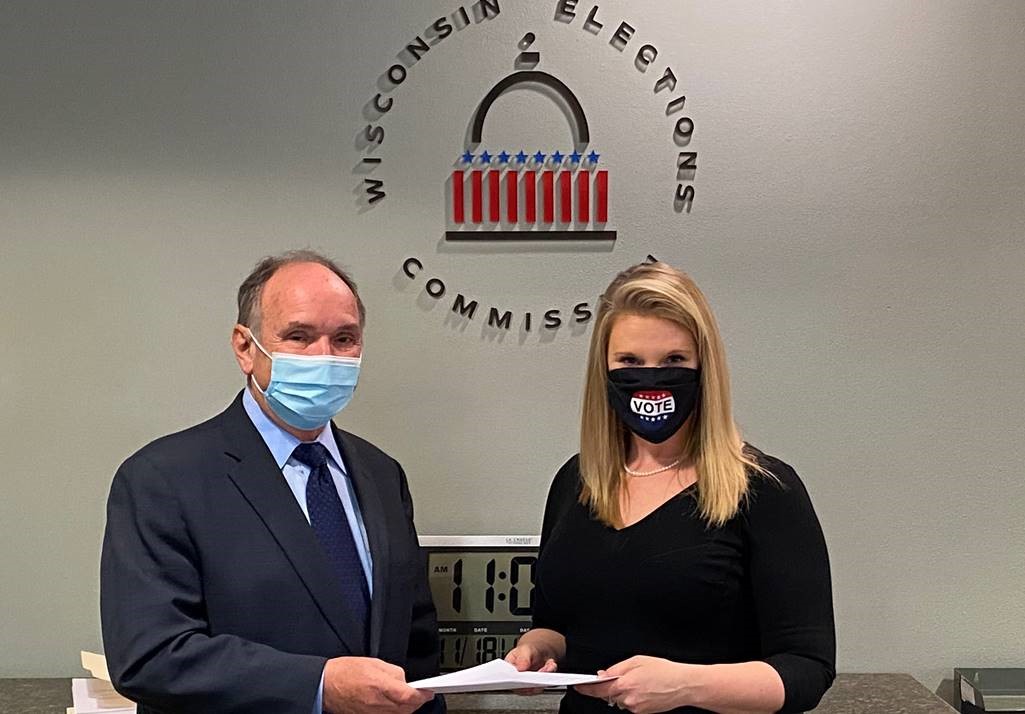