Premieres in Milwaukee on January 3-8 at the Marcus Center. Tickets on Sale Now! 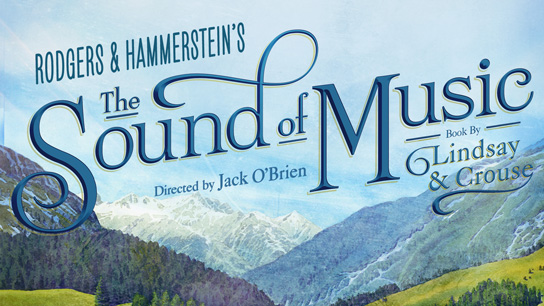 Tickets are on sale now for the brand new production of THE SOUND OF MUSIC , directed by three-time Tony Award® winner Jack O’Brien on January 3-8. This lavish new production will make its Milwaukee premiere January 3-8 at the Marcus Center as part of a North American tour and the Associated Bank Broadway at the Marcus Center series. Tickets are available at the Marcus Center Box Office and can be purchased in person at 929 North Water St, Downtown Milwaukee, by phone at 414-273-7206 or online at MarcusCenter.org or Ticketmaster.com. Groups of 10 or more should call Group Sales at 414-273-7121 x210 or x213. For more information, please visit www.TheSoundOfMusicOnTour.com.

And introducing CHARLOTTE MALTBY as Maria Rainer in her national tour debut.

Director Jack O’Brien had this to say about casting the iconic role of Maria: “I was privileged to actually see Mary Martin in the original production – as I was myself just a junior at the University of Michigan.  She was a great star, and she was giving a ‘great star’s’ performance.  She was at the apex of her career, and she was both brilliant and 46 years old.

“But in reading it privately, something caught my eye:  Maria is probably, as a postulant, no more than six or seven years older than Liesl!  She may be many things – a country lass, a climber-of-trees, a young renegade, but she is clearly NOT an established star!  How interesting!

“I’ve always believed Maria was a ‘star-making’ part, rather than the leading role we remember from the movies and our experience; so I went looking for someone with star-making magic.”

On his new leading lady, who takes over the role from Kerstin Anderson: “You often wonder if lightning ever strikes twice?

“Our original Maria in THE SOUND OF MUSIC, an undergraduate sophomore from Pace University, was just such an original – and as a truly youthful “discovery” in her theatrical debut, she pretty much shattered both expectations and all previous molds.  So when it came time for her departure, one wondered if the entire event might change into something very different.

“….and then, Charlotte Maltby walked through the door.  The daughter of celebrated writer and director, Richard Maltby, Jr, she was, of course, theatrical royalty personified; but was I prepared for her poise, her naturalness, her timing, her elegance?  No, I was not.  Was I prepared for that voice – one of the richest and most powerful I believe I have ever heard in a theatre before?

“No, I most assuredly was not.  And yet, there she stood – and the tears in my eyes as I heard the first notes of THE SOUND OF MUSIC testified that we were in a small age of theatrical miracles:  there was lightning once more, pure, and anything but simple.

“Our discovery now is your pleasure; we are blessed by not only the continuing gift of this “sleeping beauty” of a musical, but more so by the refreshing talent that is somehow inevitably attracted to perform in it.”

According to director Jack O’Brien, “THE SOUND OF MUSIC has been in our ears for decades, as it deserves to be. But it might be time to look once more, and more closely, at this remarkable work which, I feel, begins to reveal itself as deeper, richer, and more powerful than ever. It’s no longer ‘your mother’s’ familiar SOUND OF MUSIC. We are tearing off the varnish of the past from one of the great glories of our theatergoing experience and making it fresh! This is an opportunity we’ve all longed to create!”

Producer Beth Williams (Grove Entertainment) said, “It’s a great privilege to bring this beloved Rodgers & Hammerstein musical to theaters across North America. We hope that people of all ages will continue to fall in love with it for the first time, or all over again, and that it will truly become one of their ‘favorite things.’ From our distinguished team led by the creative master Jack O’Brien, audiences can expect a truly magnificent production of THE SOUND OF MUSIC.”

In the words of Ted Chapin, President of Rodgers & Hammerstein, “THE SOUND OF MUSIC continues to be the world’s most beloved musical.  When a major national tour was suggested, I not only agreed, but was willing to roll up my sleeves and do whatever I could to fashion a new stage production that would re-engage today’s theatergoing public. The show was originally created for Broadway, and seeing it on stage only reinforces the power of the story and the score. And with Jack O’Brien at the directorial helm – well, we simply couldn’t do better. Landing somewhere between The Coast of Utopia and Hairspray (shows for which Jack won the Tony®), his production is smart, focused, and surprising.”

THE SOUND OF MUSIC enjoyed extraordinary success as the first live television production of a musical in over 50 years when “The Sound of Music Live!” aired on NBC in December, 2013; 2015 marks the 50th anniversary of the film version, which continues to be the most successful movie musical in history. The spirited, romantic and beloved musical story of Maria and the Von Trapp Family will once again thrill audiences with such songs as “My Favorite Things,” “Do-Re-Mi,” “Climb Ev’ry Mountain,” “Edelweiss” and the title song.

ABOUT ASSOCIATED BANC-CORP
Associated Banc-Corp (NYSE: ASB) has total assets of $29 billion and is one of the top 50 publicly traded U.S. bank holding companies. Headquartered in Green Bay, Wisconsin, Associated is a leading Midwest banking franchise, offering a full range of financial products and services from over 200 banking locations serving more than 100 communities throughout Wisconsin, Illinois and Minnesota, and commercial financial services in Indiana, Michigan, Missouri, Ohio and Texas. Associated Bank, N.A. is an Equal Housing Lender, Equal Opportunity Lender and Member FDIC. More information about Associated Banc-Corp is available at www.associatedbank.com.

BROADWAY ACROSS AMERICA is part of The John Gore Organization family of companies, which includes Broadway.com and The Broadway Channel.  Led by 9 time Tony-winning producer John Gore (Owner & CEO), BAA is the foremost presenter of first-class touring productions in North America, operating in 41 markets with over 270,000 subscribers. Current and past productions include Beautiful, Cats, Chicago, Fiddler on the Roof, Finding Neverland, Million Dollar Quartet, Hairspray, On Your Feet!, School of Rock and The Producers. Broadway.com is the premier theater website for news, exclusive content and ticket sales. For more information please visit BroadwayAcrossAmerica.com and Broadway.com.