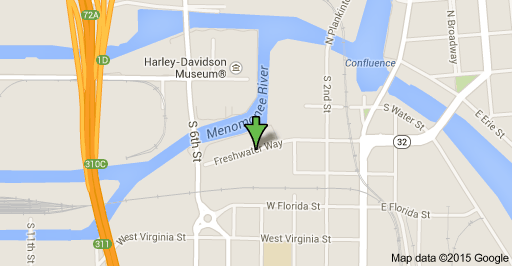 SpikeMKE LLC is a new sand volleyball facility opening this summer in Milwaukee’s 5th Ward. SpikeMKE will be building five lit outdoor sand volleyball courts to the south of the Harley-Davidson Museum.

Why do we need SpikeMKE?

SpikeMKE came into fruition for multiple reasons. First and foremost, we were looking to turn Milwaukee eyesores into assets to the community. General Capital Partners has started the process with this site and aim to turn it into the premier water research business parks in the world. Many sites around the city are sitting vacant as developers try to find tenants and develop plans for long-term usage.  General Capital Partners and the city of Milwaukee have been kind enough to grant us short-term use of a portion of the 10 acres of land at 580 Freshwater Way. This area is zoned for long-term development as part of a Global Water Technology Park. This research park will consist of nine buildings that are LEED Platinum certified and our hope is that in bringing close to 2,000 people a week to the area there will be more visibility to the Global Water Technology Park and the research that will take place here.

The big push to move this project forward came from a notification that went out to just under 500 teams saying current management at Bradford Beach would not be hosting leagues this summer.  With the majority of the teams being 6 person teams this leaves a lot of people looking for a place to play volleyball this summer.  Thankfully, with our facility being lit, we will be able to host up to 420 those teams.

In addition to our league play we are looking forward to having Kerri Schuh, a local National Volleyball League (NVL) player, coaching camps and clinics for junior players, at least two tournaments this summer, open volleyball during the day and a beautiful riverfront to enjoy along the Hank Aaron Trail.

Construction for SpikeMKE will start approximately the first week of May. Leagues are currently open for registration at www.SpikeMKE.com and will begin on May 18, 2015. Although, this is a little later than most leagues in the area start, we will still be able to get two nine-week sessions of play this summer.  Registration for 9 week doubles leagues will cost 200$ while 6 person teams will be 350$. Through March 31st, 6 person teams will have a *Not So Early Bird Special* of only 300$ per team.

SpikeMKE is a company that believes in the triple bottom line: financial, environmental and social impact.  As the company grows, we want to support as many local businesses as possible through collaboration and mutual gains. Companies such as General Capital Partners, Town Bank, Purple Door Ice Cream, Rumor, The Harley-Davidson Museum among so many more in the neighborhood all keep money in the community and help provide jobs to local residents. This is a practice we whole-heartedly support.  Furthermore, by providing a space that residents can enjoy the river and outdoors we hope that we become a local asset. Down the road we also aim to be powered by sustainable energy practices.

Who are we and will SpikeMKE create jobs?

Well, who “we” is going to entail is not yet entirely determined.  But, as of right now Rob Salamon will be SpikeMKE’s General Manager. Rob is a Sergeant in the Wisconsin National Guard as well as an engineering student at the University of Wisconsin-Milwaukee. Rob also has 14 years of restaurant experience and is passionate about sustainability and helping develop neighborhood economies. One way Rob is able to do this is to create between 3-5 new jobs with this seasonal facility. The first person Rob brought on board was Kerri Schuh.

Kerri is a National Volleyball League (NVL) competitor and will be assisting with running leagues as well as coaching junior’s camps and clinics over the summer. Her professional playing experience will be a great added benefit for the facility as well as anyone looking to improve their game.