Black Pearl Sings! stars Lynette Dupree (Film –Their Eyes Were Watching God) as Pearl, an African-American woman with an expressive voice and a passed down knowledge of spirituals and folk songs. Dupree’s co-star is Colleen Madden (longtime American Players Theatre company member) as Susannah Mulally, an ambitious song collector for the Library of Congress who is searching for something of her own.

Black Pearl Sings! takes place in 1933, when an ambitious song collector for the Library of Congress visit a Texas prison where she meets Pearl, an African-American woman with a soulful voice and steely spirit. Featuring more than a dozen beautiful a capella renditions of spirituals and American folk songs, Black Pearl Sings! explores what it means to be a woman in a man’s world, being black in a white world, and fighting for one’s soul in a world where anyone can be a commodity.

Black Pearl Sings! begins performances January 19 and runs through March 18 in the Stackner Cabaret. Opening night is set for Sunday, January 21 at 7 pm. Tickets to this emotionally moving musical are now on sale and can be purchased online at www.MilwaukeeRep.com, by phone at 414-224-9490 or in person at the Ticket Office (108 E. Wells Street).

Executive Producer for Black Pearl Sings! is Katherine Gehl. The Rep is sponsored in part by The United Performing Arts Fund. 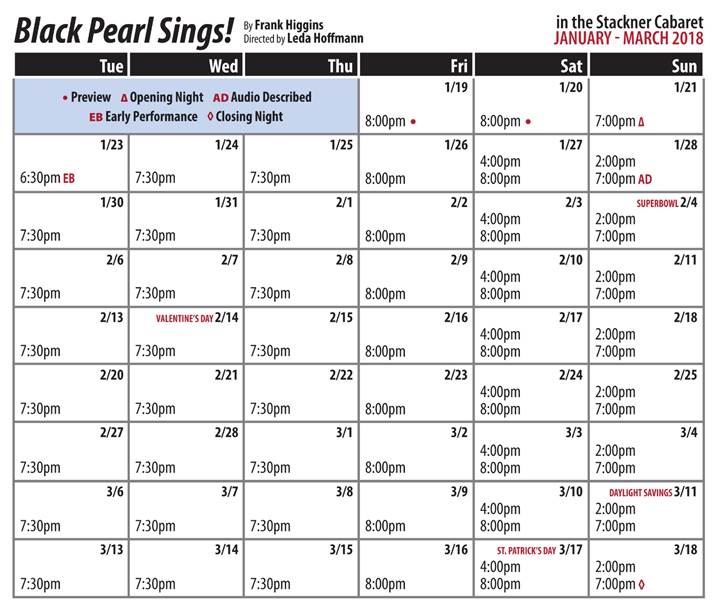 Audio-Described Performance: Sunday, January 28, 7pm – the show will be described for patrons who are blind or have low vision.