Nichols sees us moving toward a nation where everyone knows everything, or at least thinks so. 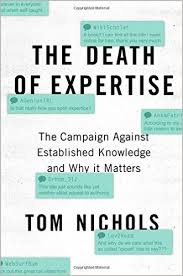 The Death of Expertise: The Campaign Against Established Knowledge and Why It Matters

MILWAUKEE — Author Tom Nichols will discuss his book, “The Death of Expertise: The Campaign Against Established Knowledge and Why It Matters” in an upcoming “On the Issues with Mike Gousha,” Tuesday, Feb. 28, from 12:15 to 1:15 p.m. at Marquette University Law School’s Eckstein Hall, 1215 W. Michigan St.

Nichols, a Naval War College Professor, argues in his new book that we live in dangerous times. “Never have so many people had access to so much knowledge, and yet been so resistant to learning anything,” he writes. He cites a number of reasons for why expertise is increasingly viewed with scorn and why experts are often seen as elitists. They include the ease with which information can be obtained on the internet, today’s brand of politics, and trends in higher education and media that confirm our biases. Nichols sees us moving toward a nation where everyone knows everything, or at least thinks so. And he says that this has serious implications for our democracy.

The event is at capacity for members of the public. Registration for a waiting list is available online.