Annual ParkScore® Index Reports Sharp Increase in Park and Trail Use, but Experts Sound Alarm over Park Inequities and Risk of Budget Cuts

Milwaukee, Wis. – As state and municipal leaders continue reopening parks and open spaces as the world weathers the COVID-19 pandemic, The Trust for Public Land announced that Minneapolis, Minn., reclaimed its position as the nation’s best park system on the annual ParkScore® Index, edging ahead of defending champion Washington DC.

Milwaukee ranked 28th, earning strong marks for park access. According to ParkScore analysts, 90 percent of Milwaukee residents live within a 10-minute walk of a park. In all ParkScore cities, only 72% of residents have 10-minute walk access. However, Milwaukee’s overall ranking was hurt by below-average scores for park acreage and dog park access.

Milwaukee trails and parks are currently open, although most amenities, such as playgrounds and restrooms, are closed. The city has also announced plans to close some roads to motor vehicle traffic to increase outdoor access for pedestrians and cyclists.

The nonprofit organization reported overall progress for parks this year but warned that city park systems have reached a critical tipping point, as widening inequities in equitable park access and COVID-related budget cuts risk irreversible damage in 2020 and beyond.

“When stay-at-home orders permitted, people increasingly turned to parks, trails, and public open spaces to connect with nature, exercise, and enhance their mental and physical health. Residents deeply value parks, but continued inequity and the risk of future budget cuts threaten severe damage to the park systems that make many cities so livable,” says Diane Regas, President and CEO of The Trust for Public Land.

According to the Trust for Public Land’s ninth annual ParkScore® index, Minneapolis, Minn., has the best city park system in the country. The city pulled slightly ahead of 2019 champion Washington, DC, largely because of new park acquisitions and strategic expansions. DC fell to second, and St. Paul, Minn., finished third. Minneapolis has held the top spot in four of the past five years. The annual ParkScore Index evaluates park systems in the 100 most populous U.S. cities.

“We are honored by the top ranking and recognize how important parks are to all Minneapolis residents, particularly during this national health crisis,” said Al Bangoura, Superintendent of the Minneapolis Park and Recreation Board. “We remain committed to providing critical park improvements and services, with a focus on the most racially diverse and economically challenged areas of the city. For years we have used equity tools and metrics in establishing our annual budget, capital improvement budget and recreation programming, and we will continue to do so during this pandemic.”

Boston, Mass., reached the Top Ten for the first time since 2016, landing in ninth place and pushing rival New York into 11th position. Boston and San Francisco, Calif. (eighth place), are the only ParkScore cities where 100 percent of residents have a park of public open space within a 10-minute walk of home.

The number of playgrounds increased nationally by 3.6 percent since last year, largely because of “shared use” agreements that open school playgrounds for neighborhood use after school hours and on weekends. The number of dog parks increased by nearly four percent, continuing the trend first reported by The Trust for Public Land five years ago.

“Across the United States, 100 million people – including 28 million children – lack access to a quality park close to home. These inequities exist not only between cities but also within them. Low-income neighborhoods do not get their fair share of park investment, which is a missed opportunity to prevent long-term health and climate inequities. At the Trust for Public Land, we are striving for a park-rich future that offers inclusive public space for everyone to lead healthier, happier, lives,” says Diane Regas, President and CEO of The Trust for Public Land.

“Parks are a critical part of health and wellness—reducing anxiety, stress, and depression and improving physical health—all the more necessary during this public health emergency,” says Sadiya Muqueeth, DrPH, MPH, Director of Community Health at the Trust for Public Land. “Sunlight, fresh air, exercise, and access to nature all have a positive effect on our physical health and emotional wellbeing.”

Analysts at The Trust for Public Land also warned that the economic downturn caused by the COVID-19 pandemic will strain municipal budgets and threaten progress on parks.

“While few cities have announced budget plans for 2021 and beyond, park advocates are gearing up for a fight,” said Bill Lee, Senior Vice President for Policy, Advocacy and Government Relations at The Trust for Public Land. “We encourage the federal government to provide relief to struggling park systems in the next recovery bill. We need our parks, and we will not allow park systems to be collateral damage from the COVID-19 pandemic.”

Following the 2007-2008 economic crisis, parks budgets were slashed across the nation by approximately 20 percent, which slowed new park acquisition and improvements for several years.

ParkScore rankings are based equally on four factors: park access, which measures the percentage of residents living within a 10-minute walk of a park; park acreage, which is based on a city’s median park size and the percentage of city area dedicated to parks; park investment, which measures park spending per resident; and park amenities, which counts the availability of six popular park features: basketball hoops, off-leash dog parks, playgrounds, “splash pads” and other water play structures, recreation and senior centers, and restrooms.

According to The Trust for Public Land, the 10 highest ranking park systems in the United States are:

The lowest-ranking park systems are:

Fort Wayne, Ind., and Indianapolis, Ind., declined to participate in ParkScore 2020 and were not ranked. Gilbert, Ariz., was not ranked because the necessary data was unavailable.

The ParkScore Index uses advanced GIS (Geographic Information Systems) computer mapping technology to create digital maps evaluating park accessibility. Instead of measuring distance to a local park, the rating system’s GIS technology considers the location of park entrances and physical obstacles to access. For example, if residents are separated from a nearby park by a major highway, the ParkScore Index does not count the park as accessible to those residents, unless there is a bridge, underpass, or easy access point across the highway. The Trust for Public Land collaborated with GIS industry leader Esri on GIS design and implementation.

Municipal leaders use ParkScore information to guide park improvement efforts, studying park access on a block-by-block basis and pinpointing the areas where new parks are needed most. The ParkScore website, www.tpl.org/parkscore, is free and available to the public, empowering residents to hold their elected leaders accountable for achieving equitable access to quality parks for all.

About the Trust for Public Land

Recent Press Releases by The Trust for Public Land 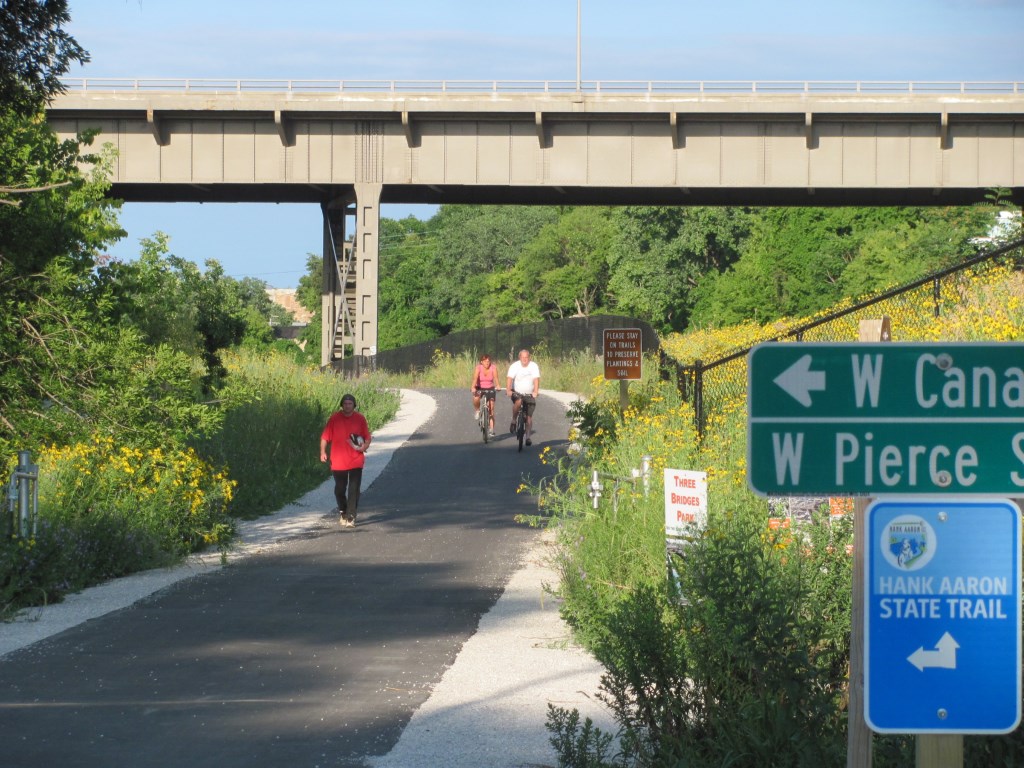