A New Method To Count Wolves, A Better Fit For Wisconsin 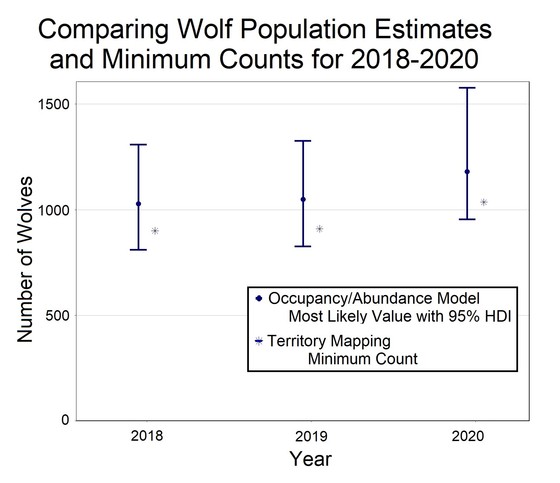 Comparing the wolf population estimates and minimum counts for the last three years. The minimum count was within the confidence interval of the new occupancy model all three years. / Photo Credit: Wisconsin DNR

MADISON, Wis. – Extensive survey efforts conducted by the Wisconsin Department of Natural Resources (DNR), tribal biologists and more than 100 trained citizen volunteers indicate an increase in Wisconsin’s wolf population from last year. This increase follows two years of steady abundance estimates and was measured in both the long-standing territory mapping method and the department’s new occupancy-based model, which will provide a more robust estimate of the state’s wolf population for years to come.

The territory mapping method produces a minimum count of wolves in Wisconsin. This year, the overwinter minimum wolf count was calculated to be 1,034-1,057 wolves, a 13% increase from the 2018-19 minimum estimate of 914-978 wolves. The number of packs detected increased from the previous year from 243 packs to 256.

Over the past seven years, the DNR has researched and developed a new occupancy model, which produces highly reliable estimates, provides a more realistic estimate of the total population size and efficiently makes use of state resources.

After multiple years of research and testing, DNR researchers are confident transitioning to this new monitoring technique. For the past three years, the DNR has calculated both the outgoing minimum count using territory mapping and the incoming population range using the occupancy model. Each year, the minimum count fell within the occupancy model’s population range, giving DNR researchers greater confidence that the new model is a reasonable and reliable alternative to territory mapping for Wisconsin’s wolf population.

Moving forward, the DNR will report the wolf population estimate using the numbers calculated with the occupancy model. The department will no longer produce an overwinter minimum count.

To learn more about wolves and wolf monitoring in Wisconsin, visit the DNR website.

Since 1979, the DNR has monitored the state’s wolf population using a territory mapping method, which produces a minimum count. The territory mapping method incorporates ground-based tracking, aerial observations and location data from collared wolves to map pack areas and estimate pack size. Data are then combined to estimate the minimum number of wolves each winter.

Territory mapping has been a reliable method for producing a minimum wolf count in Wisconsin for 31 years. However, as Wisconsin’s wolf population has increased, the amount of effort and resources required to map every pack’s territory and determine each pack’s size has also increased. While territory mapping was feasible and warranted when the population was small and scattered during the early years of recovery, the need for a new method of monitoring wolves in Wisconsin has become more pressing, particularly now that the population exceeds 1,000 wolves.

Researchers at the DNR and the University of Wisconsin-Madison developed the department’s new occupancy model with data from systematic winter tracking surveys and collared wolf packs to estimate the total area occupied by packs. The model then combines average pack territory size with the average number of wolves in each pack to estimate the state’s wolf population.

Unlike the territory mapping method, occupancy models do not require that every pack’s territory be fully mapped or that every wolf in a pack be counted. Similar to the population modeling tools used for other species, the wolf occupancy model uses statistical tools to estimate likely population levels in areas of the state where data may be lacking. When coupled with direct measures of data quality through a confidence interval, the new approach provides significant improvements over the prior methodology.

Occupancy modeling was first implemented for a state wolf population in Montana in 2007 in response to their rising wolf population. Two years later, Idaho followed Montana’s lead and adopted the occupancy-based approach. Both states have been using occupancy models to monitor their wolves ever since. The Wisconsin DNR has built off the work of these states to develop an occupancy-based approach tailored to Wisconsin.