Steve Roell, chief executive officer of Johnson Controls, from 2007 to 2013. 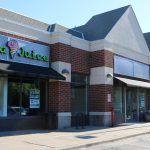