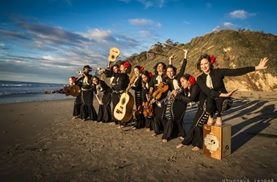 Mexican-Dominican violist Mireya Ramos broke the mold in 2008 when she founded Mariachi Flor de Toloache, the first all-female mariachi band in New York City. The group started as a trio but now boasts a roster of thirteen musicians from throughout the world, including Mexico, Germany, Cuba, the Dominican Republic, Puerto Rico, Colombia, and the United States. Mariachi Flor de Toloache was created to preserve Mexico’s rich musical culture and infuse it with edgy sonic influences as diverse as the musicians’ backgrounds. The band’s performances are as enchanting and spellbinding as the mystical Toloache flower used in love potions.