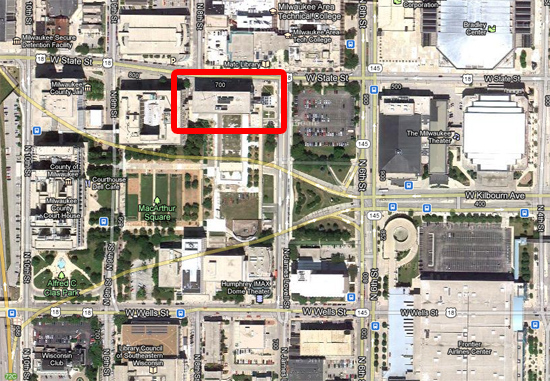 Alderman Bob Bauman, who represents downtown and the near west side, has put forth a proposal to relocate the Milwaukee Police Department headquarters and municipal courts to southeast corner of 27th Street and Wisconsin Avenue. As part of that proposal the MPD District 1 station would be relocated to W. Wisconsin Avenue between 6th Street and the Milwaukee River and the former MPD headquarters would be redeveloped.

Scion Group‘s $16 million expansion of 2040 Lofts went before the Board of Zoning Appeals (BOZA) to obtain a dimensional variance allowing for less parking spots than required by current zoning. Having received conditional approval and support of the local Alderman previously this project has begun construction on the foundation work and is scheduled to be completed in 2009. Despite one neighboring property owner’s concerns regarding parking the board recognized that this is a student housing development and that the demand for parking would be lower than a typical development of this size. In a further attempt to alleviate parking concerns and allow students from Marquette University, MSOE, MIAD and UWM to live within the development, the Scion Group has plans for shuttle buses to run from 2040 Lofts to various destinations throughout the city. Finally it was pointed out during the meeting that if this project was zoned as an apartment building, instead of a rooming house, it would already meet the zoning requirements. The board followed the local Alderman’s recommendation and approved this variance.

Both Marquette University and the University of Wisconsin-Milwaukee have been working on multiple expansions within downtown Milwaukee. Marquette University has two major initiatives including the $100 million Discovery Learning Complex and the new Marquette University Law School. The Discovery Learning Complex will house the College of Engineering on recently acquired land at the 1600 block of West Wisconsin Avenue. This effort has received a series of large donations including $50 million from one family. Additionally Marquette University has received large gifts including $30 million from Joseph J. Zilber to support the development of the new Marquette University Law School at 13th and Clybourn. The University of Wisconsin-Milwaukee intends to open a new School of Public Health on land near the Brewery development. This initiative has received a $10 million gift from Joseph J. Zilber to push the project forward and insure it is developed downtown. These universities investment in downtown Milwaukee indicates a growing demand for higher education opportunities within the city. In apparent response to these expansion two new student housing developments have recently brought forward. First The Scion Group proposed and addition to 2040 Lofts that will have 100 rental units to be built on an existing surface parking lot to the north of 2040 Lofts. This project focuses on attracting Marquette students and building on the success of the existing 2040 Lofts. The second project announced by New Vision Development Co. is estimated at $75 million and it will be located at N. 6th and W. State streets. Although it will generally target MATC students, it will be open to students from Marquette University, Milwaukee School of Engineering and University of Wisconsin-Milwaukee as well. It is clear that as these universities continue to expand downtown they will continue to bring additional projects to downtown Milwaukee.