Magic for Eye and Ear

7 Stories at Next Act Theatre

The Off-Broadway Theatre gets edgy with this new comedy, with expert timing and a rubber-faced protagonist.

The novel approach of setting Shepard's play in an actual apartment works, but some of the acting does not.

‘The Smell of the Kill’ convinces

What if you had the chance to kill someone without consequences?

Invader? I Hardly Know Her!

At the moment, Invader? is Milwaukee’s own Little Shop of Horrors, bristling with snappy comedic dialogue, clever lyrical twists of the music, self-referencing humor and absurd plot points.

Youngblood finishes its summer season with an intriguing, absurdist original work that shows off acting chops.

Video presentation, a fluid direction, and that staccato way of talking. You know? Yeah. But you know? Right. It's playing at Bay View's Alchemist Theatre.

The Winter’s Tale, told in the dead of summer

If the acting of Winter's Tale shines, then it's the APT stage design that intensifies the illumination. The production has been set in the late 19th (and early 20th) century.....Set changes are inventively pared down to the modified placement of a single and simple chair.

The one thing any Shakespeare play doesn't need in order to be successful is extraneous sensationalism. The Bard's text alone often makes the plays so dense that any effort to heighten them with elaborate or ornate design elements can seem like depreciation. With language so beautiful, characters so rich, and dramatic turns so engaging - all Shakespeare needs for a quality production is a talented and dedicated cast, supported by equally worthy direction. With Milwaukee's Quasi-Production' staging of Henry V, a vast array of talent has assembled to create a simple but highly engaging depiction of the solidarity of soldiers, the beauty of love, and the power of unity.

It is the final play from William Shakespeare's historical tetraology of British kings, and the most oft-quoted. This Quasi Productions performance of Henry V grew not only out of a collective desire to make a worthy theatrical presentation, but from a grim sense of incompletion.

pirates-penzanceA hilarious reach for the pinnacle of musical ridiculousness, Milwaukee's latest production of Gilbert and Sullivan's The Pirates of Penzance fully engages its audience's satirical sensibilities. Whimsically adapted by the Skylight Opera, this production is less a straightforward rendering of the classic comic opera and more a snapshot taken with a hall of mirrors lens. 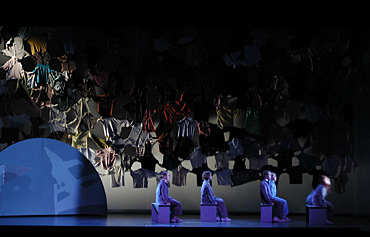 Map of Memories is not only an enthralling 90-minute kinetic display of beautiful sinewy human motion but also a local history lesson. A performance event features a fascinating pre-show talk by Milwaukee Historian John Gurda about the origins of Jones Island, its inhabitants, and its eventual change into its support for modern industry. 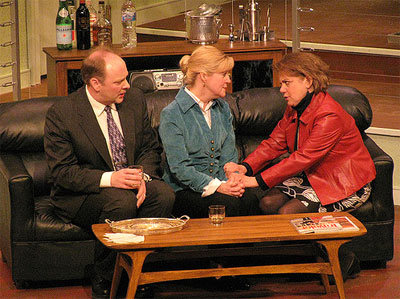 Successful New York art dealers Barbara and David Kahn are about to have a problem. That problem comes in the form of a elderly, walker-using, bitter woman named Sophie. She is Barbara’s mother, and ever since Sophie’s husband died and children have grown up she has developed a penchant for creating arguments and difficulties with […]

“This is a play about time,” the Narrator of The Pavilion announces. And “time” here is both an intriguing theme an theatrical snag. The Pavilion is the latest entertainment offering of Next Act Theatre. Although the play has moments of genuine humor, literary beauty and acting prowess, overall, the production’s full-size sheet felt stretched out […]

On the surface Edward Albee’s 1951 play Who’s Afraid of Virginia Woolf? – currently playing at The Alchemist Theater – seems to be nothing more than an intellectual pun on the verse “Who’s afraid of the big bad wolf?”, having little to do with the author herself. However, the disenchanted couple at the core of […]

Is it better to be loved or feared? This question gets to the heart of A Bronx Tale, Chazz Palmenteri’s tour de force currently ready to enthrall you at the Marcus Center’s Uilein Hall. The story takes place in the 1960s in (you guessed it) the Bronx and centers around a boy, Calogero (“C”), and […]

Watch For Salamanders, Snakes, Frogs And Lizards On The Road by Wisconsin Department of Natural Resources