How Can U.S. Marshals Help Milwaukee? 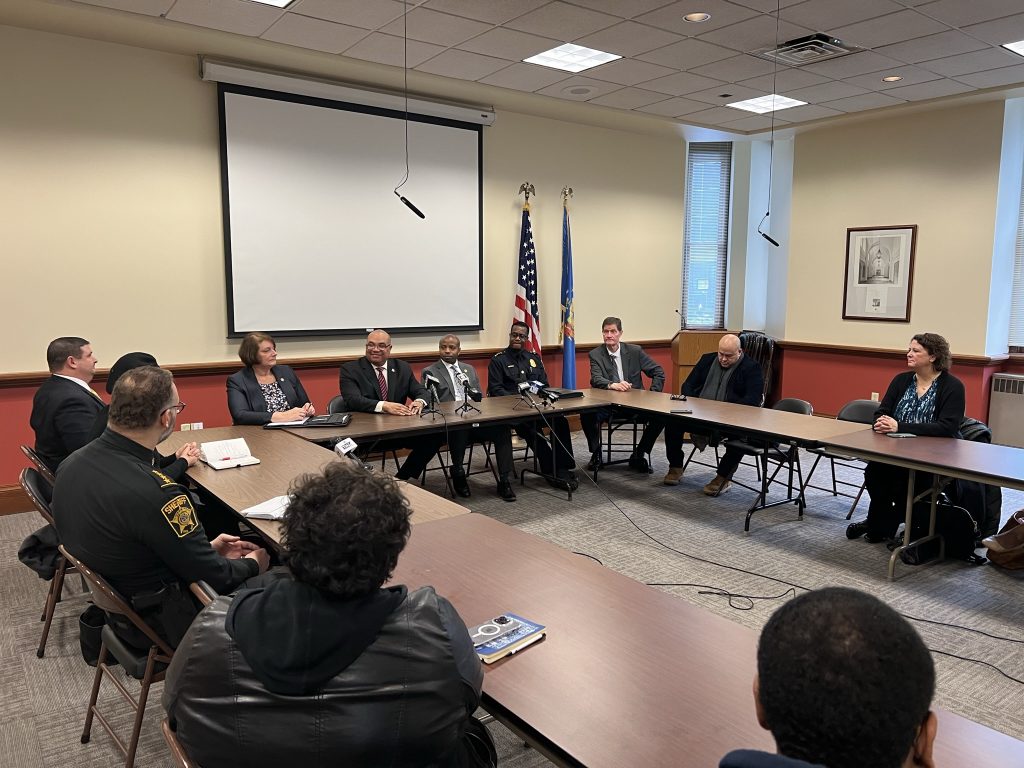 “I’m from the federal government and I’m here to help.”

It’s a phrase that U.S. Marshals Service director Ronald Davis said historically was a warning of bad things to come (at least since then-President Ronald Reagan dubbed them the “most terrifying words in the English Language.”). But at a public meeting of Milwaukee public safety leaders, Davis said the Marshals Service is trying to be a good partner.

“The challenge of violent crime is not unique to Milwaukee,” said Davis at the federal courthouse Wednesday morning. “There are a couple of things we think we can assist with, and I will underscore the word assist.” He said that includes strategies that are community-based and community-driven. The director said his agency is also able to help identify and apprehend the small group of individuals believed to be causing the most significant amount of crime.

“I’m here actually more to listen and learn and identify what we can do as the federal government. I think the worst thing we can do as the Marshals Service or any federal agency is to come in and think we are responsible and take control,” said Davis. “This is not a new partnership, but I’m here to see if we can add to it. But equally important, can we learn from it?”

Mayor Cavalier Johnson and Police Chief Jeffrey Norman thanked Davis for his interest. “Milwaukee is not alone in our challenges, unfortunately. It’s a trend nationally,” said the chief, referencing a surge in gun violence.

Milwaukee leaders have plenty of ideas for how the U.S. Marshals can help, ranging from changing the nature of how people are apprehended to becoming a more notable presence at community events.

“Often times they’re able to walk back out that same day,” said Chisholm of the offenders.

Davis said such a program was in the works for Milwaukee, but it would take time to build.

“It’s not just a site where you can turn yourself in,” said Davis, explaining the program’s need for law enforcement, prosecutors and judges to be present. “The marshall here [Anna Ruzinski] has made it clear that she wants to do it.”

Ruzinski said it improves outcomes for all involved, and even those not. That includes, she said, neighbors whose lives can be disrupted and trust reduced when a large law enforcement contingent apprehends a suspect. “Our task force goes into neighborhoods, they don’t like doing that. It has an impact on the neighborhood,” said Ruzinksi.

The Safe Surrender effort started in Cleveland in 2005 and found success, but Davis, who joined the agency in 2021, said he didn’t know why it ended. It’s due to return to Cleveland this month, and he said work is well underway to bring it to Milwaukee.

Milwaukee’s Office of Violence Prevention Director Ashanti Hamilton and a host of other leaders said the Marshals can help build trust.

“We all know we can’t solve this from one angle or agency,” said Medical College of Wisconsin assistant professor at the Institute for Health and Equity Constance Kostelac.

“We have children that are dealing with unresolved trauma, drug addict mothers and fathers, fathers that have been in prison. It’s clear to see that an ingredient is missing,” said Monte Mabra of Voice of the Fatherless Child. “You can bake a cake, and it looks perfect, but if there’s no sugar in it when you bite it, it doesn’t taste right.”

Get a daily rundown of the top stories on Urban Milwaukee
He said the U.S. Marshals could attend community programs, changing the perception of them as officers that simply take people away. “I think we are losing the focus on family reunification.”

Hamilton said the city is also struggling with youth retaliatory violence. “Many of them are known actors,” he said, noting that trust between law enforcement and the community needs to be built so that community members turn those bad actors in before they commit additional harm. “Those that are coming in to get those young people should have a presence in the community already.” He said the community also needs to feel that justice is being served, “because otherwise, they’re going to do street justice themselves.”

Norman said he thought there was an actionable opportunity for both police officers and marshals to show up to build trust instead of just at a traumatic moment when an arrest is made.

The mayor said it would also be necessary for existing community leaders to provide information on the U.S. Marshals to the community. He said that included members of the Common Council, where both he and Hamilton previously served.

In a media scrum after the meeting, Davis did not rule out that the agency could consider bringing Operation North Star, a 30-day apprehension program that in 2022 resulted in 1,501 fugitive arrests in 10 cities, to Milwaukee. Last year, the agency conducted “Operation Triple Beam Honey Badger” in Wisconsin, which resulted in 260 arrests of known violent offenders.

“I am confident we are looking at providing additional resources and support,” said Davis.