First up for Elizabeth Brown is updating revitalization plan, then landing a grocery store. 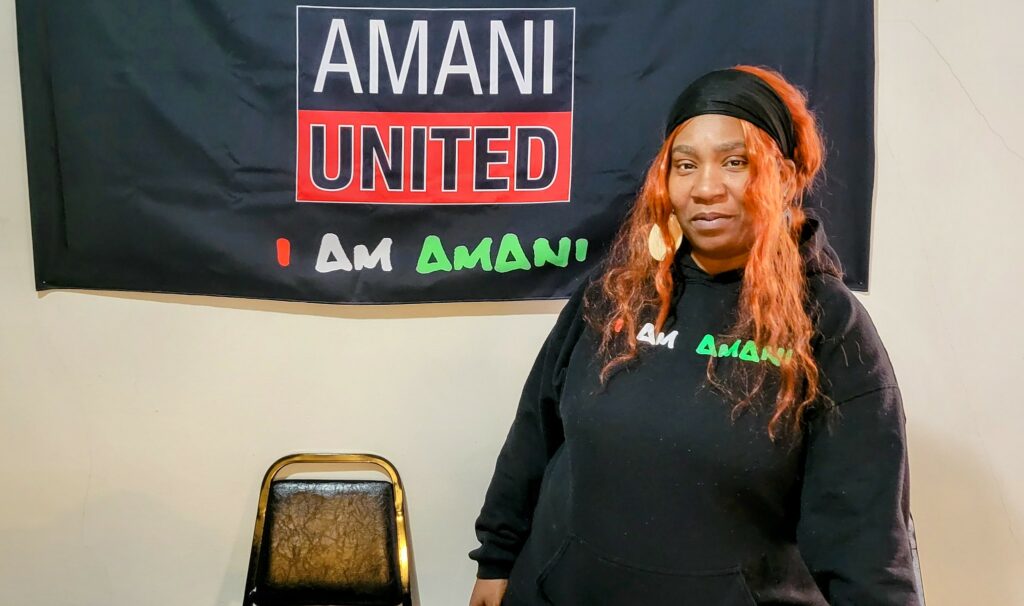 “I want to see a better community for all of us,” says Elizabeth Brown, who was sworn in as president of Amani United on Jan. 7. Photo by PrincessSafiya Byers/NNS.

Brown, 49, has been an off-and-on Amani resident for the past 15 years and has been active with Amani United and its partner agencies for the past five years. She was inaugurated Jan. 7.

Amani United is a resident-led group. Its members serve, engage and provide resources to their neighbors. Brown has served as chairwoman of the group’s Friends of Moody Park and Education and Family Well-Being committees.

Brown, who will serve a two-year term, said she hopes to spend that time engaging her neighbors in discussions surrounding the growth of their community.

“If nothing else, by the time my term is done, I hope to have more resident involvement,” Brown said. “From elders to youth, I want everyone included.”

Though her time in the role has just started, Brown has a list of tasks she is preparing to tackle.

“The first thing I hope to do with this role is clarify our neighborhood revitalization plan so that more residents can understand and use it,” Brown said.

In addition, Brown wants to build relationships with property owners and find out what it will take to have a grocery store in Amani.

“She’s been involved and taking on leadership roles in Amani United for the last four years since I’ve known her,” said Amanda Clark, housing organizer with the Dominican Center. “In my opinion, she’s been the president, it’s just official now.”

The Dominican Center works as a partner agency with Amani United. The organizations team up often for different programs and events that happen in Amani’s community.

Amani United impeached its former president, Corey Kirkwood, at the end of 2021 over allegations of negligence in his position. The group has since been led by interim president Jarvis West, who did not run for the presidency.

“We’ve been telling her to run for president and she’s finally decided to do it,” said Soleil Harvey, Brown’s daughter. “She’s been caring for the community, and she’s been putting in the work.”

Said Brown, “I don’t like the spotlight that comes with this role. I just want to do what I’ve always done and do the work.”

Brown believes she’ll do well in this position because she is a representation of her community.

“I am Amani. I represent parents and the children. The single mother, the gang banger, the grandparents raising their grandchildren, the tenants and the homeowners. I am all of us and I want to see a better community for all of us.”

‘I want everyone included’: Amani United’s new president says she will focus on building relationships was originally published by the Milwaukee Neighborhood News Service.