By Joe Schulz, Wisconsin Public Radio - Jan 11th, 2023 11:07 am
Get a daily rundown of the top stories on Urban Milwaukee 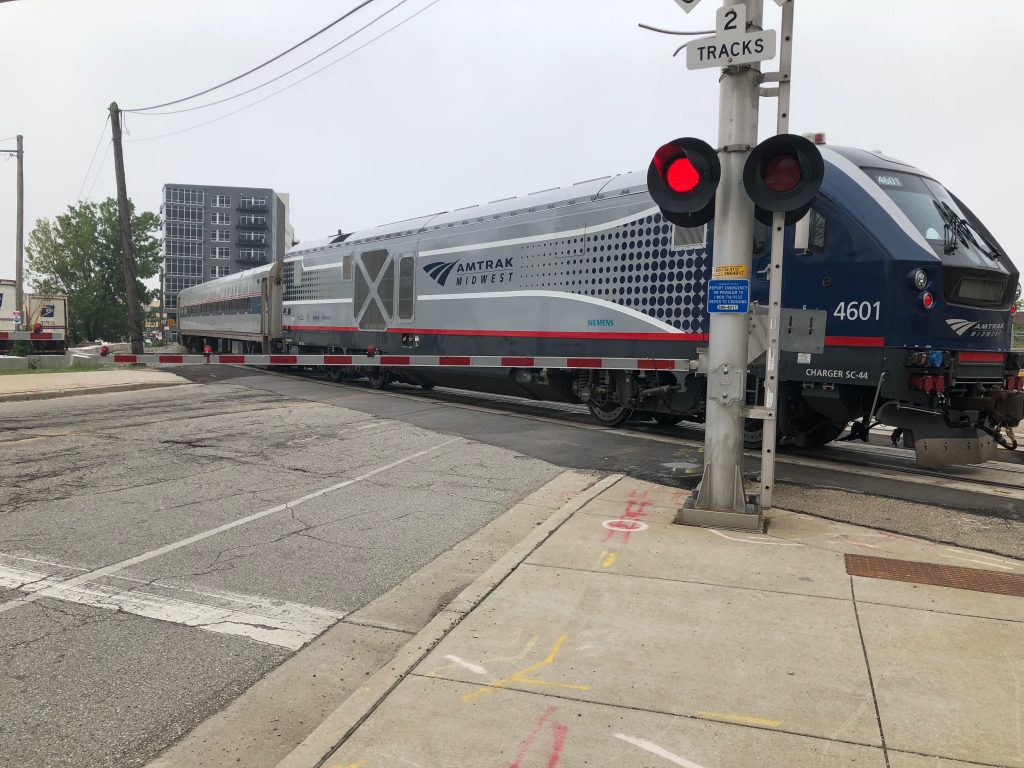 Municipal leaders requested the region be incorporated into the federal administration’s Corridor Identification and Development program, an initiative included in the Bipartisan Infrastructure Law that aims to identify new passenger-rail corridors.

“This new passenger rail corridor would provide residents of Green Bay and the greater Fox Valley region with increased mobility options to the state’s largest city, as well as service to Chicago,” the letter reads. “A Green Bay — Milwaukee — Chicago Amtrak service would create new connections between major metropolitan cities, medium-sized cities, and colleges and universities.”

Local officials hope to expand Amtrak’s Hiawatha line, which runs from Milwaukee to Chicago, as outlined in Amtrak’s ConnectUS plan. The expansion would include four new stations in Fond du Lac, Oshkosh, Appleton and Green Bay, as well as three daily round trips from Green Bay to Chicago. 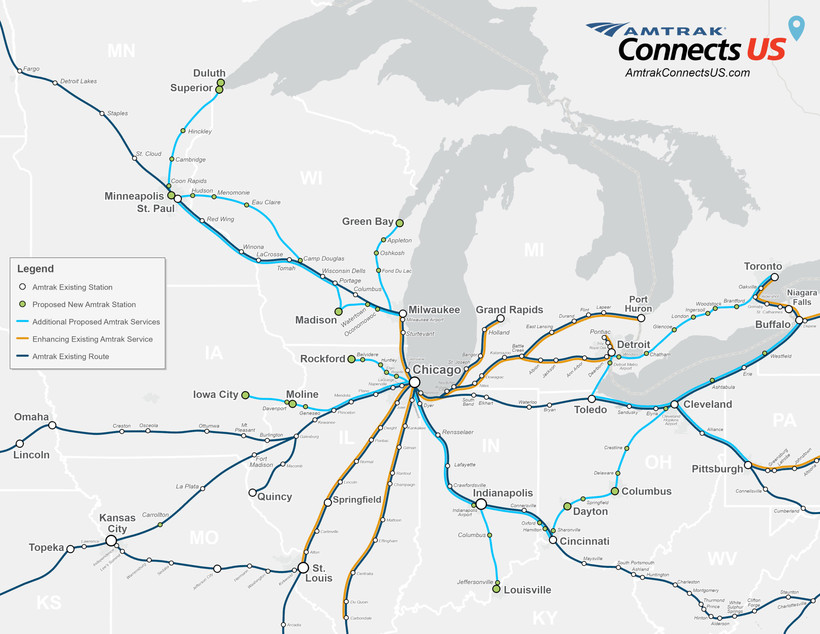 This map details possible Amtrak expansions in the Midwest, including potential connections to Madison and Green Bay. Photo courtesy of Amtrak

The Fox Valley is the third-largest metropolitan area in Wisconsin. The Fox Valley and Green Bay are currently served by Amtrak’s Thruway Interstate-41 bus service.

“There’s been a lot of talk about rail in the southern part of the state, and we’ve not yet really been a part of that conversation in our region,” he said. “What we put together is an expression of interest. It’s really just us saying, ‘We want to be a part of this conversation as a region, as neighbors, as partners.'”

Madison and Milwaukee officials have also said they would like to see a passenger rail connection between those cities.

But expressing interest is only the first step. City leaders still have to submit a formal proposal to the agency by March 20, according to a railroad administration spokesperson.

The railroad administration will evaluate the proposals to decide which municipalities will join the Corridor Identification and Development program. If selected, the exact funding amounts from the federal, state and local governments are unclear, the spokesperson said.

Woodford acknowledged that it’s still very early in the process and said he’s working with the East Central Wisconsin Planning Commission to develop a plan. He said it’s important to first unite municipalities around showing interest in passenger rail.

“Ultimately, a corridor expansion like this will succeed or fail based on the level of partnership and collaboration among our communities and among the levels of government that are going to be involved,” Woodford said.

But any passenger rail expansions in Wisconsin are likely to run into roadblocks. According to the Associated Press, Assembly Speaker Robin Vos, R-Rochester, and Senate Majority Leader Devin LeMahieu, R-Oostburg, are united in their opposition to using state funds for the expansion of passenger rail.

After his election in 2010, Former Republican Gov. Scott Walker killed a rail line that would have connected Madison and Milwaukee. That project would have been funded with $810 million from the federal government’s stimulus package.

Despite the failure of that plan, local officials say a passenger rail connection from Milwaukee to Green Bay would have a major economic impact.

Green Bay Mayor Eric Genrich said Amtrak estimates the Green Bay connection would generate $1.3 billion dollars in one-time economic activity for the creation of the rail line and $70 million annually. He added that a passenger rail expansion also has support from private sector partners, including the Greater Green Bay Chamber of Commerce and the Green Bay Packers.

“We’re hoping that people at the state level understand the economic benefit that passenger rail would have on this region,” he said. “There’s an incredible amount of economic activity that would be stimulated by the creation of this passenger rail line.”

While many think passenger rail would be used most by people traveling from Green Bay to Milwaukee and vice versa, Genrich said the bigger benefit would be for those living between Fond du Lac and Green Bay.

“We’ve got one million people between Fond du Lac and the city of Green Bay; we’ve got so many folks that live in one of those communities and work in another,” he said. “There’s a lot of commuting that goes back and forth, so I think that’s really the substantial everyday benefit that people will see around here.”

The Wisconsin Department of Transportation plans to expand I-41 between Appleton and Green Bay from four lanes to six beginning next year, but Woodford said adding lanes alone won’t relieve traffic congestion.

“Even as (I-41) is going through a corridor expansion over the next couple of years, we really need to lay the groundwork for other ways of moving between our communities,” he said. “Because bottlenecks on highways are going to slow down our ability as a region to be economically competitive and grow.”

Beyond the potential economic benefits of passenger rail, Genrich said northeast Wisconsin’s bid for a passenger rail connection could be aided by President Joe Biden, who mentioned Green Bay when speaking at Amtrak’s 50th anniversary.

“He gave a speech and talked about the bipartisan infrastructure bill and what it would mean for passenger rail, and name-checked the city of Green Bay in those comments,” Genrich said. “I’m not shy about reiterating that when I’m talking to some of these federal officials.”

If the railroad administration identifies the Milwaukee to Green Bay connection as a viable corridor, Woodford hopes to bring state officials — across party lines — together to have a rational conversation that’s grounded in facts.

“If we let our preconceived notions guide us before we’ve gathered all that information, then we’ll be doing our constituents a disservice,” Woodford continued.

‘We want to be a part of this conversation’: Green Bay, Fox Valley interested in passenger rail expansion was originally published by Wisconsin Public Radio.