Antisemitic incidents in state up 459% since 2015, but Jewish community remains strong.

By Gaby Vinick, Wisconsin Public Radio - Nov 28th, 2022 05:02 pm
Get a daily rundown of the top stories on Urban Milwaukee 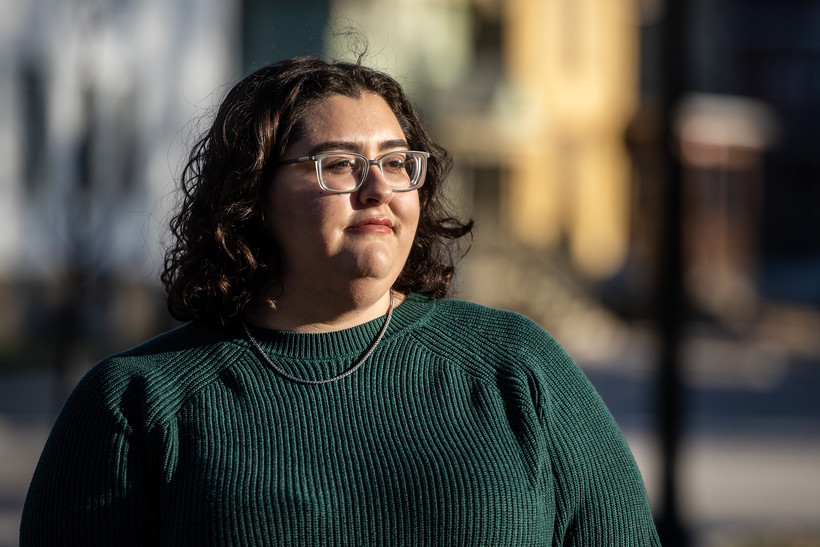 Meira Meadows, a woman who was verbally harassed for being Jewish, stands near her home in Madison, Wis., on Monday, Nov. 21, 2022. She is now involved in StandWithUs, an international, nonpartisan Israel education nonprofit. Angela Major/WPR

Meira Meadows was a college freshman when she and her three siblings were verbally harassed in downtown Milwaukee for being Jewish.

Her younger brother was wearing a kippah, the traditional Jewish head-covering, that night in April last year when they grabbed a quick bite in the city. A man followed the group down the block and hurled an antisemitic slur at them.

A few days later, her father, an Orthodox rabbi, stood on their front lawn on the phone with Meadows’ grandmother. A man in the neighborhood saw him wearing his kippah, walked up and punched him in the face. Meadows’ father shouted at him, but the man laughed and kept walking down the block.

“That night was the first time I’ve ever seen my father cry,” Meadows said.

The family filed a police report, but nothing came of it.

These incidents were jarring for Meadows, but they reflect a growing trend of attacks against the Jewish community in Wisconsin. Statewide, Jewish people represent less than 1 percent of the population. But from 2015 to 2021, there’s been a 459 percent increase in antisemitic events, according to the Milwaukee Jewish Federation, which tracks and reports those acts of hate against Jewish people.

Like many other Jews, Yuval Lerman, president of Badger Alliance for Israel at UW-Madison, said he’s encountered antisemitism his entire life. While he’s frustrated at seeing it materialize on campus in various ways, he still feels safe.

Education is one of the best ways to combat antisemitism, Jewish leaders say. They also stressed the need to forcefully speak out against prejudice and applaud those who do.

“We’re not going to stop people from being hateful. What we can do is try to show them and everyone what a Jewish person is, and how we have common ground,” said Michoel Feinstein, the Chabad rabbi in Green Bay.

But the proliferation of antisemitic messages and incidents is still disheartening for many. At the University of Wisconsin-La Crosse last month, members of the College Republicans group chalked the message, “Kanye is right.” It referred to antisemitic statements by rapper Ye, formerly known as Kanye West, who threatened in a tweet he would go “death con 3” on “JEWISH PEOPLE” and has repeatedly endorsed a range of antisemitic stereotypes and conspiracy theories. DEFCON is an acronym for the U.S. military defense readiness system.

“I think there’s been an underpaying attention to antisemitism, and sometimes, I think it’s because of how antisemitism plays out when it’s not violent,” said Miryam Rosenzweig, president of the Milwaukee Jewish Federation.

“It wasn’t just, ‘I don’t like Jewish people,'” she said. “(Ye) was actually calling for an action there.”

UW-Madison, home to the nation’s sixth-largest Jewish student population, has also seen chalkings, some of which Hillel’s Greg Steinberger said at a Board of Regents meeting this month played into antisemitic tropes. One read, “Zionists have blood on their hands.”

Kenosha saw a spate of antisemitic flyers at the end of 2021 through this July, according to Beth Hillel Temple Rabbi Dena Feingold. Some blamed Jewish people for the “COVID agenda” while others suggested they profited off of the vaccines. In August, police hit the man believed to have been distributing them with littering fines amounting to more than $4,000 dollars.

The temple also had its first active threat practice this year. This came after people at the Colleyville synagogue in Texas were held hostage. Some members have told Feingold they are on high alert when they arrive in the parking lot, but the temple has ramped up security over the last few years since the Pittsburgh Tree of Life massacre.

“We have to be cautious,” she said, “but we continue to practice our religion and enjoy our festivities and our traditions and do them with joy and celebration, as we always have done.”

A Madison Children’s Museum employee was recently fired after he dressed up as Adolf Hitler for Halloween. And in Milwaukee that night, a different man wore a Nazi uniform, according to Rosenzweig.

She called it “disturbing” to trivialize the Holocaust. Nationally, Jewish people represent about 2 percent of the population but are the target of nearly 58 percent of religious hate crimes, FBI data shows.

“The mocking of it is making it so light that it explains the environment that we’re in because it doesn’t matter anymore. Nothing is important. Nothing is sacred,” Rosenzweig said.

There’s also a common sentiment that people outside of Jewish communities need to participate in countering antisemitism.

“If we just talk about this as a Jewish issue, we’re missing the point,” Rosenzweig said, stressing that when extremists go after Jews, they also hound other marginalized groups.

For Meira Meadows’ part, her experience motivated her to get involved in StandWithUs, an international, nonpartisan Israel education nonprofit.

The day after her father was attacked, the family took time to process the events. But the next day, they all had to go back to work.

“I think that’s one of the hardest things to do where it’s like, we always have to push forward,” she said.