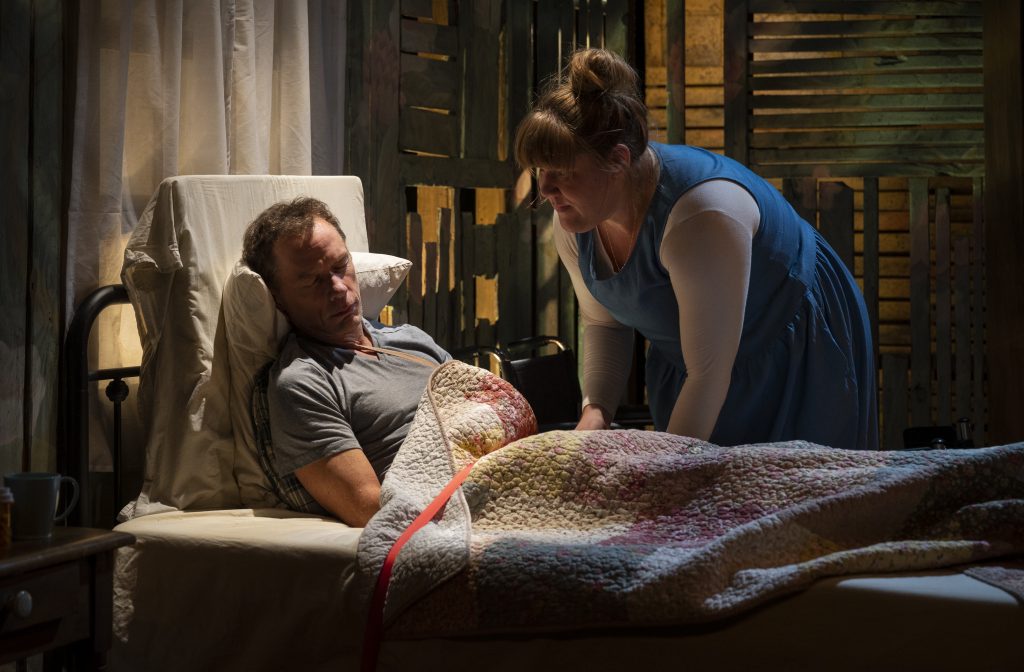 The Milwaukee Chamber Theatre’s adaptation of Stephen King’s novel Misery, in its flexible William Goldman script, does not try to make us forget its claim to fame as a celebrated 1990 movie for James Caan and (most memorably) Kathy Bates. But Goldman wrote versions for both film and stage and the intimate nature of the Studio Theatre at the Broadway Theatre Center favors a stripped-down version. It also makes some physical elements better and some philosophical subtleties harder to comprehend in this intensely intended, but dramatically spotty production through Dec. 18.

This version heightens the sense of claustrophobia and panic as celebrated author Paul Sheldon wakes with his legs broken and arm dislocated from a Colorado car crash. He has been rescued but more truthfully spirited away in secret by his “number one fan,” Annie Wilkes, an obsessed former nurse out of a Freudian textbook who hides him in an isolated farmhouse (a functional set by Lisa Schlenker with bedroom, lockable doors and kitchen cabinets crammed cheek to jowl).

She praises him, withholds drugs, flies into emotional rages when he doesn’t write what she wants, physically threatens him and mentally outguesses him, always a controlling force of deranged nature.

The only other character who pops up at the front door at times — we keep hoping he will recognize Annie’s prattling nuttiness and rescue Sheldon — is local sheriff Buster, well played by Christopher Elst.

King has said he intended Annie to be burly, but mainly she should be psychologically as well as physically intimidating. Kelly Doherty portrays her changes of mood and savagery almost factually, as if denying there is any underlying motor to grab hold of. The character does show so many symptoms you don’t want to blame the actress, but she seldom gives us a place to land our feelings – and that is the first rule of a stage characterization.

Director Brent Hazelton has done wonderfully detailed work on the visceral moment-by-moment developments, but he may have overly simplified Doherty’s task by surrounding her arrivals with eerie sound, flashing lights or menacing silhouette in the doorway. That may have robbed the piece of some subtler dimensions.

More impressive is Jonathan Wainwright, a veteran local actor who grows in his quiet appeal to our sympathies despite or maybe because of smart manipulation of his bedridden character’s physical limits. As Sheldon, he rivets us with outbursts of painful movement as he writhes on the floor or tries to lower himself into a wheelchair – or works to drug or outwit his keeper as he clacks away at the typewriter she has provided him.

The actor is also smart enough to build contrasts into his dialogue, at different moments suggesting cunning, muted sarcasm or furious impotence.

His physical effort and her constant menace certainly keep patrons involved, though the ending doesn’t satisfy what has been building. In real time and space, the actors do not always move logically from complicated interaction to sudden outbreaks. By the end, the production becomes more like dissecting a spider than a cat-and-mouse game. 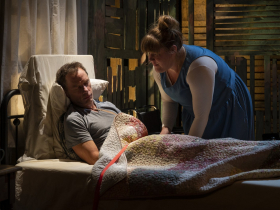 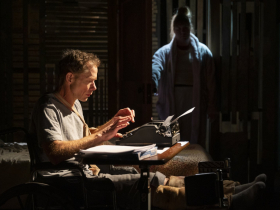 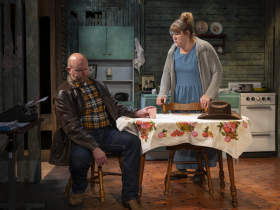