Everything You Wanted to Ask About Sex

Renaissance staging of 'The How and the Way' pits two scientists in a dense, smart, punchy discussion that surprises. 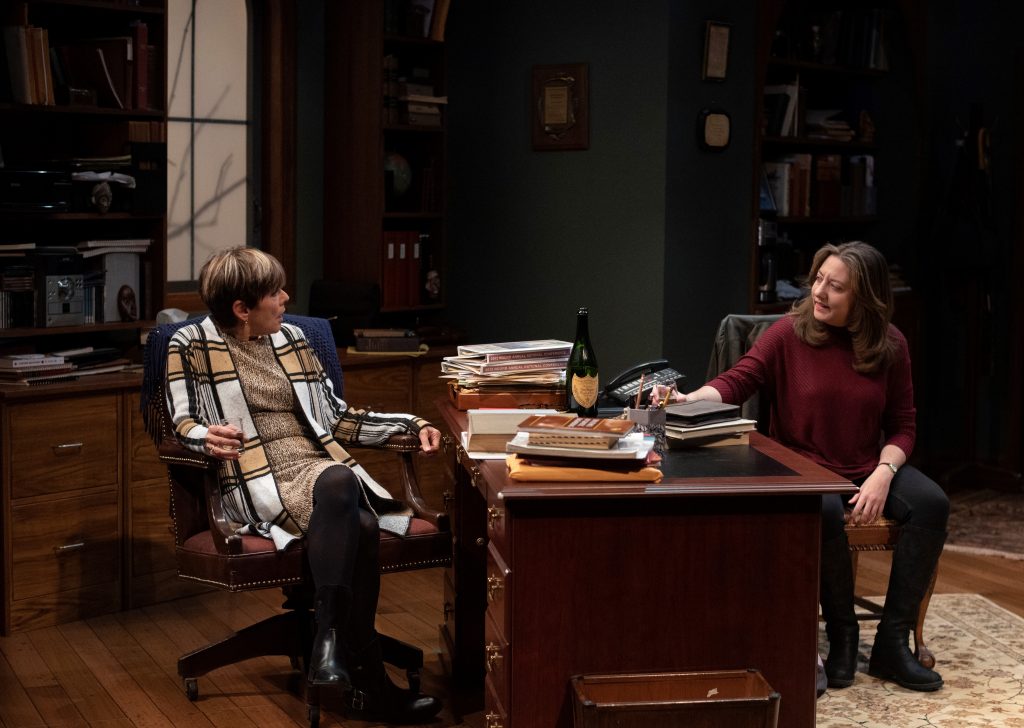 Mary MacDonald Kerr as Zelda Kahn and Elyse Edelman as Rachel Hardeman in The How and the Why by Sarah Treem. Photo by Maureen Janson Heintz.

Though it proudly waves a mantle of feminism as a theater company, Renaissance Theaterworks will probably advertise its first play of the season as about mothers and daughters. Which it subtly is — but it is also about menstruation, sperm, primates and evolutionary biology in a blunt, refreshingly probing conversation that keeps patrons intellectually fascinated and emotionally attentive.

In 90 minutes of talk, with too many flips of purpose toward the ending, the play exposes the consequences of sex in both the physical and scientific sense of the word. Some may see it as the old argument about whether a woman can have it all, but the intent is deeper than that.

The How and the Why burst onto the regional theater scene back in 2011 from playwright and now busy TV screenwriter Sarah Treem. Though the role of women scientists in probing our global world has grown as a subject for playwrights of late, Treem has a special ear not just for dialogue, but how to keep ideas and feminine realities afloat. Director Susan Fete has done an expert job in keeping the play from seeming a shrill dialectic about women in science, setting it up as a mystery that has us guessing why the confrontation is taking place.

Set in a Cambridge faculty office and then in a cafeteria, we are at first uncertain why a struggling young scientist, surprisingly immature in controlling her emotions, is visiting an assured established professor in the field of evolutionary biology. There is no hat in hand here, just some defiant attitude.

The play appears realistic, and the director and actors work to further that feeling with serviceable technical work and brisk naturalistic delivery. But it’s realistic in the way of a good George Bernard Shaw play where the arguments catch you up even though you secretly know people would not discuss such things so fluently and openly.

In consequential ways, the audience listens in attentively, occasionally laughing at the insights society too often buries. The play openly explores in scientific and personal debate the topics that most women keep hidden – and most men are not prone to consider (men don’t appear in this two-hander but they are sure talked about).

The older professor seems unflappable, confident, alert to all nuances and clear about how she has succeeded and why. Her young visitor is eminently flappable: bristling, even angry, obviously controlling her strange coldness toward the older woman, with flashes of scientific brilliance plus emotional outbursts the older woman surprisingly accepts.

There is something here about the established elders and the more intolerant young that is well worth hearing. Generations of feminism are on display – and while there is criticism, the visitor is clearly carrying forward her generation’s suspicion of the established.

Director Fete has searched out the gripping basics of the duel and has two actresses who well understand the nuances, both veterans. Mary MacDonald Kerr plays the professor as brisk, sarcastic, used to hiding her emotions and yet struggling against her own vulnerability. She holds so tight to her professional veneer that her later openness surprises us.

Elyse Edelman as the mercurial visitor handles both long stretches of dialogue and sudden shifts in attack. She develops a range of winning gestures and exasperated looks to explore the character’s outbursts of frustration and anxiety. Both fight well against the dangers of appearing too clinical under the human microscope.

The one thing left for both to master is that neither of these established scientists, despite their emerging personal relationship, can afford to stumble even briefly in delivery of the complicated expertise of their field. Treem has done a fine job in making complicated theories flow naturally within conversations. With these performers I expect any hitches in dialogue to smooth out well before the run ends Nov. 13 at Renaissance’s new home in the Next Act Theatre.